St Kilda great Nick Riewoldt has reignited the debate about the AFL’s illicit drugs policy, declaring drug abuse is a “massive” issue among current and former players and potentially contributed to the issues faced by former teammate Sam Fisher.

Riewoldt also took aim at the AFL Players Association (AFLPA) for how he claims it treated Fisher, who was charged last week with allegedly regularly trafficking large quantities of illicit drugs across state borders. 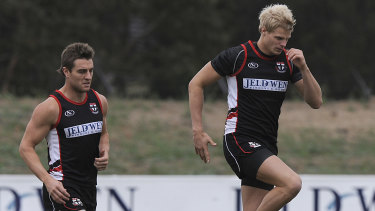 Fisher, who played 228 games for the Saints from 2004-16, did not appear in court last week, and has preferred to remain in custody.

“A lot of his close teammates knew he had some issues, but to this extent, once it was all laid bare last week, I think a lot of us were surprised at just how bad the situation had become,” Riewoldt said on Fox Footy on Monday night.

“But it landed heavy and, obviously, straight away you start thinking about Sam and the situation he finds himself in, and his family and those close to him, and you do a bit of reflecting around what more could you have done?

“A reflection on our group, the time we’ve spent together as teammates. It’s been a pretty tough week for all of those blokes.”

Riewoldt said he had approached the players association for help but the response had not been adequate.

“Players, when they are playing the game, have time, they have money, they have, I think, little appreciation of what life looks like on the other side.”

“I have had mixed dealings with the PA about Sam and about other teammates. The response from the PA, as far as I was concerned, was not even quick enough and when a response did come it was reactive and, at times, too late,” he said.

The players association had provided Fisher with help but did not provide specific details because of confidentiality requirements. The AFLPA was contacted for comment after Riewoldt’s Fox Footy appearance on Monday.

“Players, when they are playing the game, have time, they have money, they have, I think, little appreciation of what life looks like on the other side,” Riewoldt said, speaking generally.

“So [there is] time, money, lack of understanding, and drugs. I think drugs are a massive part of it. I think the policy that exists is one that allows wiggle room. They are able to tap into those things.”

Riewoldt, who once said the AFL’s three-strike rule for illicit drugs was “out of control”, said it allowed players “wiggle room” to abuse the system.

A first strike leads to a suspended $5000 sanction, compulsory counselling and education, before a four-match ban and $5000 sanction for a second strike, when a player’s name will be publicly disclosed. A third strike is a 12-match ban and $10,000 sanction. However, only former Hawthorn player Travis Tuck has been publicly found to have had three strikes.

The “wiggle room” can come through loopholes, where players who have tested positive more than once can be treated, rather than banned, if they’ve been diagnosed with a medical condition, including a mental health disorder. There is also off-season hair testing of players.

“That’s an issue, absolutely. I have been criticised for saying this in the past, that players who take drugs take them because they can,” Riewoldt said.

“There is an argument around medical modelling but, I think at some point, someone has to champion this cause because, as we said, the AFL acknowledge the greatest issue facing the game. The AFLPA would acknowledge the same thing but who, at the moment, is putting their hand up and saying: ‘You know what, we are going to own this’?”

Riewoldt said the manner in which players transitioned from the game after their careers had finished was the biggest issue facing the game.

“The AFL will concede and the AFL Players Association will concede a players’ transition out of the game is the biggest issue facing the game. And this is not, I can hear people out there already, this is not feeling sorry for players. Players are paid really well, they have opportunities available to them as they go through the game, but along the line it is not working,” Riewoldt said.

“Too many players are finding themselves post career, is not at the level it should be, and we can do more. I think the AFLPA, in particular, need to champion and take the lead on this cause to stop these situations occurring.”

Riewoldt said the next collective bargaining agreement would be an ideal way for the AFL and players association to broker a funding model for players’ transition to life post-football.