St George Illawarra will hold a board meeting on Tuesday, where it is expected Anthony Griffin’s future at the club will come under the microscope.

Pressure is mounting on Griffin with the Dragons now falling out of the top eight following back-to-back losses over the past fortnight, conceding 86 points against the Broncos and Roosters.

Multiple sources familiar with the situation at the Dragons, speaking on the condition of anonymity, also told the Herald that there are sections of the dressing room who do not see eye to eye with Griffin over his coaching methodology.

There is also angst growing towards the coach over his perceived special treatment of Queensland trio Ben Hunt, Andrew McCullough and Josh McGuire – who he has a long-standing relationship with from their time together at the Broncos.

St George Illawarra officials were criticised at the start of the year for taking up an option in Griffin’s contract for him to remain as head coach in 2023 despite missing the finals in his first year. 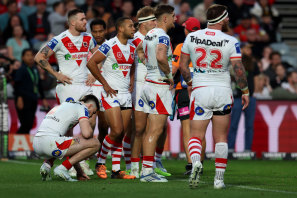 The wheels have fallen off the Dragons over the past two rounds.Credit:Getty

The Herald reported earlier this season that Griffin’s payout is worth about $475,000 and the Dragons wouldn’t be afraid to sever ties if they didn’t believe he was still the right man for the job.

At the time, the club wanted to remove any distractions and speculation around the coach’s future, triggering the option armed with the knowledge that it wouldn’t cost them an exorbitant amount to terminate him.

Questions will be asked of Griffin’s performance at Tuesday’s board meeting before the club’s must-win game against resurgent Manly.

The Dragons sit two points behind the eighth-placed Sea Eagles, who could open up a four-point gap to the red V with a win at Kogarah on Friday night.

One area of concern is the development – or lack thereof – of some of the club’s most exciting players in Jayden Sullivan, Talatau Amone and Tyrell Sloan.

Zac Lomax has also plateaued as a footballer despite signing a multi-million dollar long-term deal.

Griffin has won just 16 of 41 games since taking over as Paul McGregor’s full-time successor at the start of 2021.

The Dragons have one of the worst defensive records in the competition. Even the Bulldogs have conceded less points.

Seven years ago, Daly Cherry-Evans sensationally reneged on a four-year deal to switch to the Titans and now there are people at the club getting a little nervous about fellow Manly star Kieran Foran’s appetite to join the Gold Coast next year.

While Foran has signed to join the club from Manly next year, the Titans have heard the whispers about the five-eighth wanting to remain at the Sea Eagles. You couldn’t blame him judging by what he’s seeing from the Titans.

While Parramatta would be able to accommodate Isaiah Papali’i if by some miracle the Wests Tigers released him from his deal, the Sea Eagles haven’t got the space in the salary cap.

Benji Marshall’s first phone call as a Wests Tigers coach should be to his old mate Roger Tuivasa-Sheck.

Tuivasa-Sheck made his All Blacks debut in Saturday’s loss to Ireland in Wellington and is on target to play at next year’s World Cup.

Marshall could do worse than call his former Kiwis teammate to see if he’s interested in a rugby league return once he fulfils his desires in the 15-man code.

The Tigers would have been wasting their time even considering it, but with Marshall at the helm the door is always ajar.

Biff could be back for finals

The NRL’s decision to change the judiciary grading system for State of Origin meant Matt Burton and Dane Gagai were not suspended for the brawl in game three.

What some people are unaware of is that the change has also been brought in for the finals series. It means the biff could make a return to finals football with players unlikely to miss a game for throwing a punch or three. 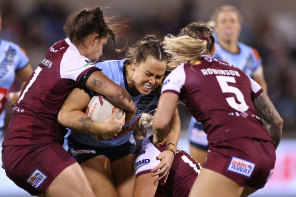 The women’s State of Origin could become a three-game series sooner than first thought.Credit:Getty Images

The NRL is considering changing the format for next year’s women’s State of Origin series. Having played a one-off game for the past five years, the women will play a two-game series next year.

The NRL is considering going straight to three games from 2023. Discussions are continuing, but there are concerns on the implications for most of the players who have full-time jobs.

Abdo spreads gospel in US

NRL chief executive Andrew Abdo is planning a trip to the United States next month. Nothing is locked in, but there is an opportunity for him to travel abroad to establish a plan for growing the sport in America.

That includes discussions about a potential NRL game to be played in Los Angeles as early as next year. The governing body isn’t after a sugar-hit. They are working out ways to ensure long-term growth in the foreign market.

The Eels have asked Penrith to release J’Maine Hopgood from the final year of his deal to join the club for the rest of the year.

The request has been knocked back twice by the Panthers despite not using him this year. Hopgood is joining the Eels next year.