Premiers Penrith are about to be given the green light to host the highly anticipated World Club Challenge against Super League champions St Helens.

After COVID-19 forced the concept to be abandoned for the past couple of years, league officials on both sides of the globe have worked hard to make sure the game proceeds next February.

Penrith officials had no appetite to drag some of their stars to the other side of the world because so many of them are already playing in the World Cup in Britain.

St Helens, who have won the Super League four years in a row, can instead look forward to swapping the end of the European winter for potentially blistering February heat in Penrith in what will now essentially double as Penrith’s second trial.

Panthers boss Brian Fletcher told the Herald he had learned of St Helens’ visit on Monday after initially thinking the game would be spiked yet again. 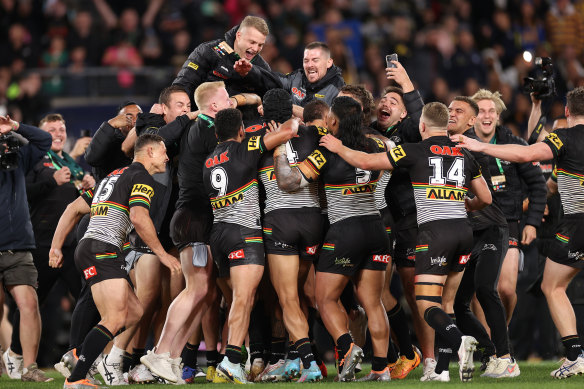 Penrith Panthers are about to get the green light to host St Helens in the World Club Challenge.Credit:Getty Images

Because stars such as Nathan Cleary, Isaah Yeo and Liam Martin are expected to feature all the way through to the November 20 final with Cup favourites Australia, their extended break means they are expected to play limited minutes – if at all – against Saints at BlueBet Stadium. The game will also be televised.

“It would have been impossible for us to go over there, but talk of them coming out here is excellent,” Fletcher said.

“We’ve only got word today that our second trial, instead of being against another NRL side, the NRL are investigating how they can bring St Helens to Sydney.

“The plan will be to play the game a week before the start of the NRL competition.

“We’d love for it to happen. It will be a great game for our fans out at Penrith, it will be great for the area, it’s something different, and it will also give some of our younger boys the chance to have a run against a quality side.” 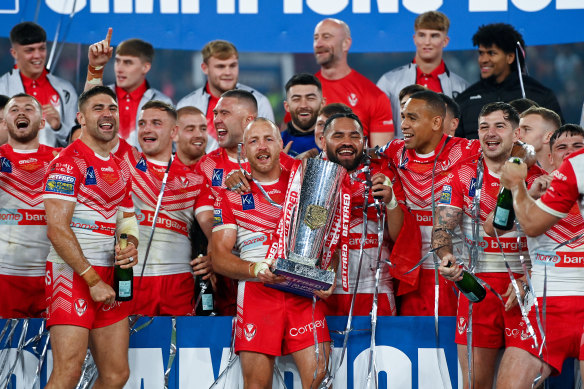 St Helens have been crowned Super League champions four years in a row.Credit:Getty

Penrith have won successive NRL titles while St Helens have been in a class of their own, including the last three titles under Dolphins-bound and Tongan coach Kristian Woolf.

St Helens declared they were keen for the concept to be revived just days after Penrith thumped Parramatta in the grand final, while Panthers coach Ivan Cleary was also open to the game.

The World Cup has caused headaches for all NRL clubs because of the delays to pre-season training.

Penrith have three Kangaroos representatives while Samoa include Stephen Crichton, Brian To’o, Izack Tago, Taylan May and Jarome Luai. Should both those nations feature in the final, they will not report for training until the end of January – less than three weeks before the St Helens game.

Meanwhile, a decision on Manly and Melbourne meeting in the US for “round zero” is expected to be made by the end of the week with the ARL Commission to meet on Wednesday.