BlueBet Stadium: Penrith thumped the New Zealand Warriors, as expected, received the JJ Giltinan Shield in front of a packed house, then revealed how they would spend part of the $100,000 minor premiership cheque on a charter flight for next weekend’s hit-and-run trip to Townsville.

The Friday night clash against the Warriors was expected to be a smash-up, and it was by half-time. The short-priced title favourites triumphed 46-12.

The frightening sight of Viliame Kikau palming off Shaun Johnson was almost a metaphor for how the two clubs have performed all season.

Ever the professionals, the Panthers had already started mapping out the logistics for next week when they meet the Cowboys in the final round.

Coach Ivan Cleary will rest a heap of players, especially with first place and a home final already guaranteed.

Hooker Api Koroisau will definitely be given a rest after receiving an early mark against the Warriors with an ankle injury. 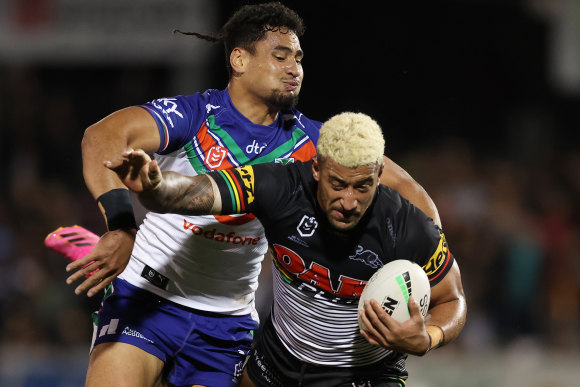 But the Panthers will fly into North Queensland on a private charter on Friday, then leave less than an hour after the Cowboys clash to rush back to the airport.

Penrith want to make sure they have an extra day to recover at home ahead of their qualifying final, while the quick exit will also allow the players to enjoy Father’s Day with their loved ones.

Cleary has maintained for several weeks he has had a few plans in place for what to do with the final round, and was giving nothing away late Friday.

There were even whispers the entire starting 13 would be given the week off, but Cleary said: “We have a few plans. We’ve been in a good position for a while, we’ll sleep on it and see how they all pull up and then work out what we do. 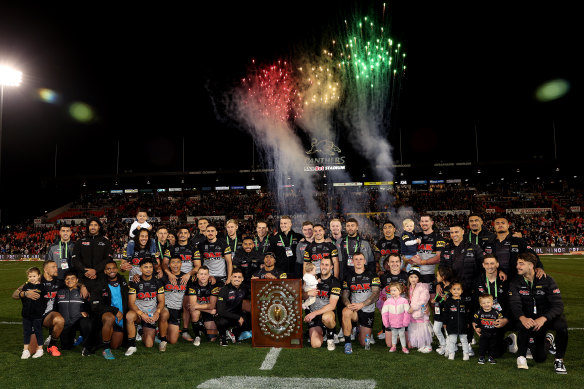 Panthers players and their families with the JJ Giltinan Shield.Credit:Getty

“I’ve never been one to necessarily rest people, but every situation and every year is different.”

It was a proper 17,025-strong Penrith party on a pleasant night at the foot of the mountains.

Despite falling behind inside five minutes to a Reece Walsh try – even though there was a hint of a forward pass in the lead-up to the long-range try – the Panthers never looked troubled.

They were clunky to start with in attack, but that was simply because they too eager to run up the cricket score most people anticipated.

Taylan May picked up a double, as did fellow flyer Brian To’o, but Sean O’Sullivan finished one of the club’s best tries of the season.

Kikau steamed on to a pass, palmed off Johnson, then passed to Izack Tago who threw a giant dummy in-field and continued the play down the short side.

Johnson was unable to stop Tago squeezing a pass for May, who then shuffled down the touchline and threw the ball back in for his halfback.

Johnson’s night was over not long after because of a calf injury.

Suddenly the Panthers had kicked out to a 24-6 lead. It was not that long ago they were suddenly kicking out to an eight-point lead on the NRL ladder.

The Panthers have won two of the past three minor premierships. They have only dropped three games all year. Jarome Luai made a successful return from injury, as did James Fisher-Harris from suspension, while the ace in the pack, Nathan Cleary, will be fresh when he returns from a five-match ban in time for the finals.

The Warriors, whose owner Mark Robinson was in the Penrith stands, return home to Mt Smart Stadium for the final round against the Titans, and will look forward to finally getting back to some normality next season after three straight seasons of COVID disruptions.