Penrith’s NSW halves are bracing for close attention from the Maroons in Origin I, but are hoping for more protection from referees after North Queensland were shown leniency when hitting Nathan Cleary high and late after he had kicked the ball on Friday night.

Panthers coach Ivan Cleary was unimpressed with a few late shots on his son and halfback during the 22-0 win, including one by Cowboys prop Jordan McLean that left the halfback with a corked quad.

“We never ever, ever, get kick-pressure penalties, and he was tackled multiple times tonight, late and in the air. Maybe it has changed [the rules],” Cleary said after the game.

Even Cleary himself remonstrated with referee Ashley Klein as to why McLean was not penalised when he continued with a tackle in the second half.

Queensland unleashed Christian Welch on Cleary in the past two series, but with the Melbourne prop sidelined for the season, there will be no shortage of other pumped-up Maroons eager to pressure the gun No. 7.

“We didn’t get any calls [tonight], and the McLean one is usually a penalty,” Nathan Cleary said. “Usually it doesn’t matter what happens, if you end up in a dangerous position it is a penalty.” 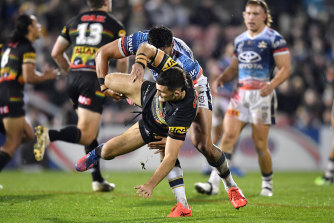 When asked if Queensland would adpot the same tactics on Wednesday week, Cleary said: “Yeah, probably. Origin is a beast in itself and there’s not too many tic-tac penalties in that. 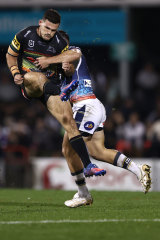 Nathan Cleary is hit hard by Reece Robson after kicking the ball.Credit:Getty Images

Five-eighth Jarome Luai was far from happy with the late shots on his halves partner and told The Sun-Herald: “I thought some of those tackles were questionable. Nat said he got hit pretty hard there and I thought a couple were penalties.

“Nat is tough and finished the game. It’s something we can’t control. I know we get penalised for it. Hopefully there is a bit of consistency there [next Wednesday].

“Something we can’t control. They have the whistle in the mouth. We get penalised for it. Hopefully there’s a bit of consistency there [moving forward].”

Luai was charged with a grade-one careless high tackle on Scott Drinkwater late in the game, but can escape with a $1000 fine. “I was reading the play, I know he [Drinkwater] is a great attacking weapon, and I wanted to get up quickly,” Luai said of the tackle. I’m not too sure if it was a shoulder charge. It happened quickly. I spoke to him after the game and he was all sweet.”

Luai is short odds to retain his place in Brad Fittler’s side for his second Origin campaign alongside good mate Cleary and up to five other Panthers teammates: Isaah Yeo, Brian To’o, Stephen Crichton, Api Koroisau and Liam Martin.

“I need to get picked first, but I am excited,” Luai said. “I’ve experienced the arena before, it’s not unknown territory to me now, and I’d be more excited to see a few of the boys here get their opportunity.

“‘Critta’ [Crichton] has stepped up in big games and in the big moments and if ‘Freddy’ picks him, he won’t let anyone down.”