During the Blues’ darkest days, when they could manage just one State of Origin series victory from 12 long campaigns, the southerners consoled themselves in the belief that Billy Slater, Cameron Smith, Johnathan Thurston and Cooper Cronk couldn’t torment them forever.

See off the champion quartet, they figured, and let the good times roll.

Indeed, the moment the trio retired from the interstate arena – Smith, Cronk and Thurston in 2017 and Slater a year later – the tide turned. NSW went on to win three of the next four series under Brad Fittler. The decision to usher in a new era with 11 debutants, including the somewhat contentious selection of young halfback Nathan Cleary, proved a masterstroke. Seemingly, one dynasty ended and another had just begun.

And then Slater, Smith, Cronk and Thurston decided to come back.

Not content with their combined 85 wins as players in the interstate arena, one of the greatest spines ever assembled has returned to inflict more misery on NSW.

This time it will be from the coaches box; Slater calling the shots as the head coach, ably assisted by his three partners in crime, as well as Josh Hannay. Between them, the coaching dream team brings the experience of playing in 134 Origins, 1601 NRL appearances and 164 Tests. 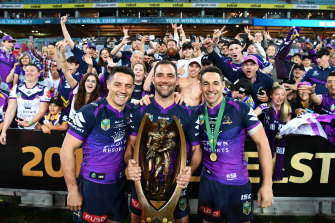 By comparison, the NSW brains trust – comprising Fittler, Greg Alexander, Danny Buderus, Andrew Johns and Paul McGregor – will draw on the playing knowledge garnered over the course of a combined 100 Origins, 1228 NRL games and 97 internationals.

All have made their mark on the footy field, and now they get to oversee the latest Origin battle from above.

Slater may be new to coaching, but he knows his football. In just his second game in Maroon, Slater chased down a midfield Darren Lockyer grubber, ran upfield with the ball in his right hand and then turned Blues fullback Anthony Minichiello into a pretzel with a spectacular chip and regather. The Maroons have been singing “Aye aye yippee yippee aye” just about every year he was involved.

“I look at the big picture; I started out being inspired by this team and that transformed into one of those players and inspiring others,” Slater told the Herald on the day the Queensland Rugby League appointed him as Paul Green’s replacement. “Now I get the opportunity to guide the current and future Maroons players to inspire our state.

“There is a lot of responsibility in and around the head coach of Queensland. It doesn’t scare me. It’s important I don’t complicate it … I’m in an environment that I know best.”

The current crop of Queenslanders are now the beneficiaries of all that knowledge.

“You get that belief in the group from Bill and JT and Smithy,” Cameron Munster said on Wednesday at the Maroons Long Lunch at the Royal International Convention Centre.

“They’ve been very successful in the Origin arena. For me, I have one of the best sixes in the game in JT. I’m sure we will have a bit of a chat about what my best game looks like and how I can improve the group. With Bill doing our attack, we are in great hands.”

Fittler, meanwhile, continues to enjoy success off the field. “Freddy” has spoken of his desire to one day return to club coaching, but few jobs appear as snug a fit as this one. Like Slater, he juggles commentary commitments with Nine without the stress that comes with the week-to-week grind.

“I’ve been around him quite a bit,” said NSW debutant Ryan Matterson, who played under Fittler at City Origin level.

“I really enjoy how he does things and how he gets the boys to gel together.

“[He’s] quirky, very quirky. Freddy is very different to a lot of people. That’s what makes him such a great player and a good coach. He goes with the flow, he’s pretty chilled, pretty grounded. Not much fazes him really, he tells you how it is as well so he’s pretty direct.”

So it’s on again. Freddy v Billy. JT v Joey. Bedsy against Smithy. Only this time, they are the ones moving the chess pieces.