Out-of-contract Blue Grace Egan says she is happy at Carlton, but will weigh up contract offers from rival AFLW teams as expansion sides put pressure on existing clubs to keep their key players.

The talented young midfielder is reportedly attracting interest from multiple AFLW teams, including Sydney, who will join the competition next season.

“Definitely had clubs approaching my manager, but I’m open to anything and Carlton has been very good to me and I love everyone there. So, whatever happens, happens,” Egan said. 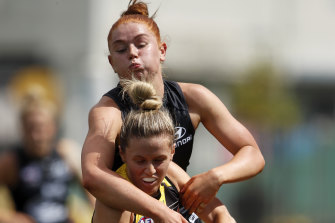 Carlton’s Grace Egan (above) has received offers from other AFLW clubs and will consider her future at the Blues.Credit:AFL Photos

Egan, 21, averaged just under 15 touches this season in the Blues’ midfield and was named Carlton’s best first-year player in 2020.

“I’m happy at Carlton. Carlton has been really good for me. I am out-of-contract this season, but that’s just for my manager, myself and the Carlton Football Club to work out,” she said.

“Wherever I end up playing footy, I’m happy.”

After the departure of Prespakis and Gee, Carlton general manager of women’s football Brett Munro said the competition’s expansion made it harder for the Blues to retain quality players. 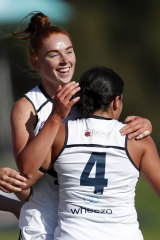 “The reality is that some of the offers being made in regards to player movement this off-season are very significant,” he said.

“That has its positives for the AFLW competition as a whole but for existing clubs, it places you in an unavoidably tough situation in terms of being able to compete with those offers.”

Speaking alongside her former teammate on Wednesday, Prespakis said the offer to play with her childhood club was too good to pass up.

“I was just a little girl running round playing Auskick when I was four and wearing an Essendon guernsey,” she said. “To be able to do it at 21 now is going to be something special.”

Prespakis said she was “very grateful” for her time at the Blues, but was looking forward to a new challenge with Essendon.

“It was a tough decision and it was something that was quite a daunting decision and those that were close to me knew exactly how it made me feel … It was quite an emotional time, and also I felt very relieved and very happy with what I’ve made for myself,” she said.

Prespakis and Egan were joined by St Kilda men’s players Max King and Jack Billings at the MCG for the launch of the AFL Auskick season on Wednesday.

Out-of-contract Egan said she grew up playing netball and basketball instead of Auskick, but was pleased the junior footy pathway was available for girls.

“It’s definitely something that I’m glad to see the girls going into now are being able to have the opportunity of it.”

Egan missed four games during the 2022 AFLW season after she suffered a punctured lung and broken ribs in a marking contest against Collingwood in round one.

“It definitely was an upsetting season for myself because … after my pre-season I was looking forward to what was to come,” she said.

“But now I bounced back from that and hopefully look forward to going into the next one.”