It was an experienced analyst from one major betting agency, rather than just the company’s technology system, that discovered the Brownlow Medal bets that led to the arrest of field umpire Michael Pell and three others.

Sources familiar with some of the information under investigation said that the highly experienced analyst at PointsBet had found what was “an irregular pattern” in the niche Brownlow market – in this case, bets on who would land the three votes in particular rounds of the 2022 season.

The analyst saw the suspicious bets on the Brownlow – which can be accessed via the company’s technology, such as algorithms – and then cross-matched the data, discovering a deeper and worrying trend across the same AFL games, and from the same punters. 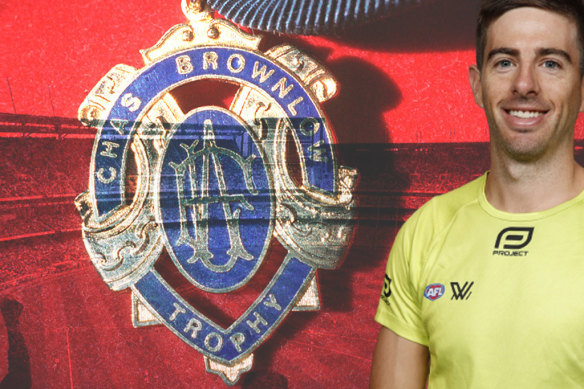 The analyst, according to well-placed sources, was then able to review the longer-term betting histories of these particular punters. By this stage, it was clear to the analyst that the Brownlow bets were suspicious.

As The Age has reported, the men under police investigation allegedly laid bets on more than 10 games in which Pell umpired and helped cast votes for the Brownlow Medal. This large number of bets, as sources familiar with the investigation said, was bound to draw attention.

The overlapping investigations by the AFL, Sports Integrity Australia and police have found that the bets in question were laid across different betting agencies – a practice that would theoretically mean those bets would stand out less than if one larger amount was bet.

PointsBet notified the AFL of the suspicious betting and this led the AFL’s integrity unit to look at other bets on the Brownlow by those under investigation.

The detection of the bets led to the arrest and questioning of Pell, a first-year field umpire, and three others, with suspicion that Pell may have passed on what Victoria Police said was “information from the voting tally”.

No charges have been laid.

The amounts bet on the “three votes” awarded in games by those involved allegedly reached up to several thousand dollars across the various betting outfits.

While the technology helped, sources suggested that the detective work by the analyst was more crucial to discovering the betting trail.

PointsBet, like other online betting agencies, has what is called a “Know Your Customer” policy that means whereas cash betting at TAB venues can be anonymous, the policy legally requires PointsBet to verify the identity of new customers within 72 hours of them signing up.

It is therefore much harder to conceal online bets that may be suspicious and potentially draw police investigation and charges. The betting agencies are contractually obligated to pass on any suspicious betting activity to the AFL, as part of their licence to take betting on AFL. They also monitor betting online for risk signs of problem gambling.

Pell, 32, was arrested on Monday by the Sporting Integrity Intelligence Unit, along with a 32-year-old Glenroy man, a 29-year-old Oak Park man and a 27-year-old man from Drouin.