The NRL has guaranteed the Dolphins will be included in Magic Round during their inaugural season, giving the competition’s newest franchise a game on the showpiece weekend next year.

On the eve of this year’s three-day extravaganza – where all 16 teams will converge on Suncorp Stadium for eight games – the NRL has already discussed how it will slate fixtures for Magic Round with an odd number of teams when the Dolphins enter the fray.

According to sources familiar with the situation, the NRL is already planning on having Wayne Bennett’s fledgling franchise build a support base during Magic Round in Brisbane.

While they are yet to land a marquee signing, the NRL has identified Magic Round as a crucial weekend to showcase the Dolphins in their home town as they build a squad capable of challenging the Broncos and emerging as a finals force.

All four Queensland clubs – including the Broncos, Titans and Cowboys – will be scheduled to play during Magic Round next year, leaving the squeeze to most likely affect a NSW-based club.

The NRL is poised to offer each of the eight teams who play a home game during Magic Round the first choice on whether they would like to take up the offer in 2023. Each club has been paid $250,000 to take a home match to Brisbane for Magic Round. 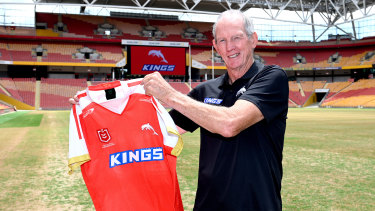 Wayne Bennett’s Dolphins will feature during Magic Round next year.Credit:Getty

The Bulldogs, Sea Eagles, Warriors, Titans, Storm, Sharks, Roosters and Tigers will all host matches at Suncorp Stadium this year, as they did in 2021. Given the commercial benefits, nearly all would be expected to do the same again in 2023.

It would mean one of the Knights, Rabbitohs, Dragons, Panthers, Raiders and Eels would be in line to miss out playing at Magic Round next year.

Each away team is still paid a small fee for being part of Magic Round.

But much of the focus will be on Bennett’s Dolphins, who have amassed an experienced forward pack including Melbourne trio Felise Kaufusi, Jesse Bromwich, Kenny Bromwich, South Sydney’s Mark Nicholls and Parramatta’s Ray Stone.

The NRL will be dealing with a complex draw next season in which each team will be scheduled for two byes across the course of a 26-round regular season, with clubs to have their rest weekends spread out as evenly as possible throughout the year.

State of Origin will revert to its traditional Wednesday format for all three matches, meaning the standalone representative round has been scrapped.

This year’s second Origin match at Perth’s Optus Stadium will be the last time Origin is played on a Sunday night, while the mid-season window for the Test matches involving New Zealand and the Pacific Nations will also close.

The Bulldogs will play the Knights in the opening match of Magic Round this year before the Sea Eagles host the Broncos in the second match of the Friday doubleheader. A blockbuster between premiers Penrith and Melbourne will be the headline match of the weekend.