All fixtures at Brisbane’s Suncorp Stadium.

Look, it’s fair to say this isn’t a blockbuster start to the week but Magic Round can be full of surprises (see Magic Round 2021, in which half the NRL was sin binned).

After nine rounds, Newcastle are running dead last. The Bulldogs are second last but only due to a slightly better points differential. On the plus side, they really do have everything to play for, while coaches Adam O’Brien and Trent Barrett really don’t want to be fronting a losing press conference against this level of opposition. The Knights welcome Adam Clune at halfback but really need a lot more from their pack, who have been outgunned weekly. Bulldogs by 8.
Phil Lutton

Sea Eagles v Broncos, 8.05pm Friday
Brisbane have finally kicked into gear and finally look a happy bunch off the field, too. Adam Reynolds has been a breath of fresh air at the joint, and he will be in the thick of it again against Manly. The return of Payne Haas and Kurt Capewell cannot be underestimated. Selwyn Cobbo and Kotoni Staggs will cause all sorts of headaches for Manly’s inexperienced left-edge combination of Ben Trbojevic and Christian Tuipulotu. The Sea Eagles look great in attack, but again their wins have come when they are expected to win. The Storm and Eels await them in the coming weeks, but the Broncos will be no pushovers. Broncos by 6.
Christian Nicolussi

Warriors v Rabbitohs, 3pm Saturday
This screams danger game for South Sydney, who have been flat this year under new coach Jason Demetriou and without the services of key players Adam Reynolds (Broncos), Dane Gagai (Knights) and Latrell Mitchell (injured). New signing Kodi Nikorima might be the one to spark something. He will play from the bench, giving young half Lachlan Ilias some welcome relief and guidance. Opposing defences are all over their familiar backline shifts so Souths need to shake things up and cut down on their glut of errors. The Warriors, though, were unable to compete with a Sharks team that had 12 men for most of the match and 11 for 10 minutes. That was diabolical but they are capable of better. A sharp start sees them in this against a battling Rabbitohs. Souths by 6.
Phil Lutton 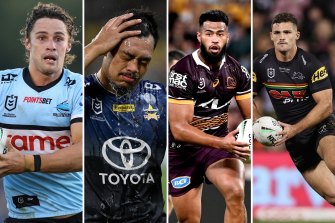 Titans v Dragons, 5.30pm Saturday
Has there been a more disappointing team this year than the Titans? Justin Holbrook’s side, who were finalists last year, desperately need a win to stay in touch with the top eight and will welcome back fullback Jayden Campbell, giving AJ Brimson the chance to return to five-eighth, but David Fifita is still out while Kevin Proctor has been axed to the reserves. Dragons coach Anthony Griffin has kept the same side which was routed by the Storm in Melbourne last week. Gold Coast has won their last two clashes against St George Illawarra. Titans by 1.
Adam Pengilly

How Magic will this game be? It’s just a bloody shame Ryan Papenhuyzen will not be involved. And with the Storm’s little livewire No. 1 out of play because of injury, it is enough to tip the balance slightly in the premiers favour. Penrith threw everything at Parramatta before crashing to their first loss of the year. They played really well and with pace, it was just the Eels were better. They will be right up for this one, and Brian To’o and Moses Leota will be so much better for the first-up blowouts after injury. Expect Nathan Cleary to have a blinder. He was filthy on himself for missing the 40m field goal to send the game into golden point last week. The Storm are humming but have been bashing up on a few easybeats. And fullback replacement Nick Meaney not only lacks Papenhuyzen’s electricity in attack, but he will also need to quickly call the shots in defence against one of the game’s best offences. Panthers by 4.

Sharks v Raiders, 1.50pm Sunday
Cronulla lose nothing with Nicho Hynes shifting to fullback, and some would argue the Sharks even gain something with him moving to the position he played so well in at Melbourne for a large part of last year. The Sharks showed plenty of ticker against the Warriors who had the odds stacked in their favour. Braydon Trindall has been playing well in reserve grade and knows what to do along side Matt Moylan in the halves. And you can only imagine his job will be made easier again with Hynes’ involvement. Canberra showed plenty of heart against Canterbury, but it was a forgettable game last Friday night. While they were good enough to beat the Dogs, they do not have the class in key positions to trouble the Shire boys. They defeated Cronulla back in round one, but the Sharks led late in that game, and Hynes came up with some poor last-tackle options in his first game in the halves, which he could be forgiven for. Sharks by 10.
Christian Nicolussi

Roosters v Eels, 4.05pm Sunday
If not for the heavyweight clash between the Storm and Panthers, this would be a clear match of the round. The Roosters showed signs of shaking off their early season wobbles against a struggling Titans side, but this is the start of a horror seven-week stretch in which they meet the NRL’s big three. Lindsay Collins (suspension) and Sam Verrills (collar bone) are out with Connor Watson named to start at No.9, although it wouldn’t surprise to see Drew Hutchison in the run-on team. No such dramas for the Eels, who are unchanged from their streak-busting win over premiers Penrith last week. But the Eels have lost five of their last six against the Roosters. Eels by 8.
Adam Pengilly

Tigers v Cowboys, 6.25pm Sunday
All smiles in Cowboy country and deservedly so as North Queensland continue to kick along in the top four as the NRL’s most improved side. Newcastle got the better of them for 40 minutes last week, but a 24-0 second half was right off the top shelf. The likes of Valentine Holmes, Jason Taumalolo and rising back-rower Jeremiah Nanai are all in ominous offensive touch and have the potential to rack up points quickly should the Tigers’ defence go to water. Tigers No.7 Jackson Hastings continues to dominate touches on the ball and direct their attack like no other team in the competition, but at what point does an opposition side pile in on him? Luciano Leilua is a fair inclusion against the club he joins in 2023. Cowboys by 16.
Dan Walsh