How the Sharks got here

A golden point epic saw North Queensland prevail and earn a home preliminary final. The Cronulla Sharks, on the other hand, are fighting to save a premiership dream tonight.

How bone marrow from a deceased donor, a $3000 tinny and fishing saved Shark’s career

A $3000 tinny kept Connor Tracey sane, before bone marrow from a deceased donor kept his knee together and his NRL career alive.

These days he and injured winger Sione “the Tongan fisherman” Katoa push each other to new depths free diving for lobster and abalone – a remarkable combination considering Katoa “could barely swim when he first started recovery sessions with Cronulla”.

Tracey will shift into the centres on Saturday night due to Siosifa Talakai’s shoulder injury as he continues to put the literal graft and grind of his stint at South Sydney, when a third knee reconstruction threatened his career, behind him.

Talakai and Royce Hunt are out. Connor Tracey moves into the centres and Brad Hamlin-Uele will start at prop.

How the Rabbitohs got here

A chaotic win over the Sydney Roosters sent the Rabbitohs into the semi-finals. Can they replicate this effort tonight?

Damien Cook says he is entitled to free booze at Northies for the rest of his career after helping deliver his best mate Dale Finucane to Cronulla.

“I get my free beers whenever [coach] Craig Fitzgibbon is up there,” Cook said. “That’s the least Fitzy can do for me after the year the Sharks and Dale have had.”

Cook jokes about being entitled to the six-and-a-half per cent commission most agents collect when brokering deals for players.

But he really did convince Finucane to seriously look at the Sharks when no shortage of clubs were in for his mate’s services, including St George Illawarra and Wests Tigers.

“I was biased, I wanted him to move to the Shire, but I also thought Cronulla would be a good fit for him – I thought he would really suit their team,” Cook said.

How do these two teams get back on an even keel after the highs and lows of last week? The Sharks waited 93 minutes to be sunk by a golden point winner from a favourite son, and the Rabbitohs emerged from an old-fashioned bash-up against their bitter rivals to advance to week two.

The last time they met it also went the distance, with Nicho Hynes kicking a match-winning field goal after normal time as Latrell Mitchell’s boot let him down with three fluffed attempts. But the NRL’s most magnetic player is waving a magic wand over South Sydney, and that is ominous for anyone on the other side of halfway. Coach Jason Demetriou will be without suspended prop Tom Burgess with Michael Chee Kam named on the bench, while Craig Fitzgibbon has named an unchanged team from the one that featured in the sapping qualifying final against the Cowboys.

The bookmakers can barely separate these teams, and who can blame them? Penrith await the winner in the grand final qualifier.

Good evening folks and welcome to our rolling coverage of the NRL’s must-win semi-final clash between the Cronulla Sharks and South Sydney Rabbitohs from a sold-out Allianz Stadium.

We are now just four games away from crowning a premiership winner for the 2022 season, with the winner of tonight’s game advancing to a preliminary final showdown with the Penrith Panthers. The Parramatta Eels have already booked their charter flight to Townsville for a date with the North Queensland Cowboys.

I’m Caden Helmers, thanks for joining me here tonight. Let’s hook in. 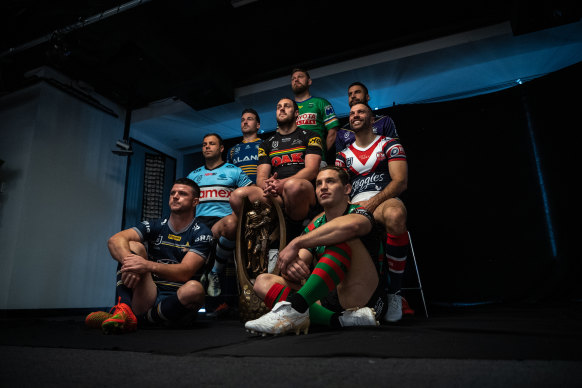 The race to the premiership is down to five.Credit:Flavio Brancaleone