The NRL’s controversial crackdown on illegal contact with a player’s head has helped reduce concussions this season by more than 40 per cent, according to ARL Commision chairman Peter V’landys.

The 2021 season saw the game’s focus on head high tackles infamously take centre stage during a showpiece Magic Round event that featured 14 sin bins and three send-offs, a hardline stance that continued for months afterwards.

According to the NRL, 100 concussions were registered from rounds 1-19 last year, with that figure dropping by 43 per cent to 57 this season for the same period.

HIAs during the same period have decreased by almost 18 per cent, from 234 assessments to 192. Of those, 61 players did not return to play in the same game, another stark decline from 105 in 2021.

Significantly, high tackle charges are also well down, from 75 to 25 compared to the same time last season, with just 12 per cent of concussions sustained in incidents that drew a penalty or worse. 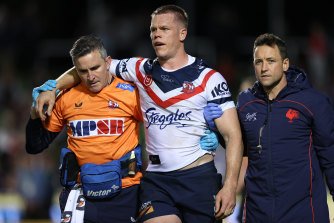 Roosters prop Lindsay Collins is helped from the field after his latest concussion against Manly.Credit:Getty

It is this figure that prompted V’landys to applaud players and officials for adjusting to the game’s strict edict on contact with the head, insisting the downturn stems from improved techniques and discipline rather than refereeing leniency this year.

“The referees have been told to send anyone to the sin bin for any forceful hit to the head and that’s exactly what they’ve been doing,” V’landys said. “There’s less HIAs and less concussions and the players in a short period of time have adjusted [to the head contact crackdown].

“You’ll never eradicate it completely, but I think they’ve adjusted and the professionalism of the players is exceptional. They realised they can’t go towards the head and in the vast majority that’s happened.

“You’ll get the occasional one because it’s a physical game and there’s still a little way to go, but there has been a massive reduction.” 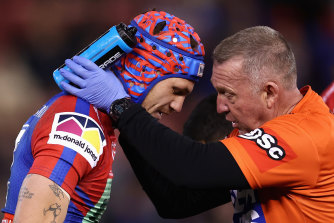 The figures come amid increased concern for players who have suffered repeated head knocks, with Bulldogs prop Thompson feared to be the latest player rubbed out for the season due to ongoing concussion issues.

Thompson has not played for Canterbury since round 12 when he suffered a concussion against the Dragons as symptoms have continued to persist in the months since and he has sought specialist consults.

Collins too is expected to be sidelined after his latest heavy hit suffered in the Roosters 20-10 defeat of Manly on Thursday.

The Tricolours prop was said to be in good spirits after full-time but remains a concern given his first half concussion was classified as category one – the most serious grading – and his second in as many games.

Collins was making his return from a two-week layoff following a similar blow suffered in Origin III, while he also suffered a serious head knock last year that saw him taken from the field on a medicab.