In today’s AFL Briefing, your daily wrap of football news:

Check back throughout the day for more updates.

In the lead-up to Collingwood’s highly anticipated preliminary final against Sydney, ruckman Mason Cox has said he doesn’t imagine the Magpies are feeling as much pressure as the remaining contenders.

The Swans have won their past eight matches and defeated Collingwood a month ago at the Sydney Cricket Ground, a preliminary final venue for the first time since 1996. 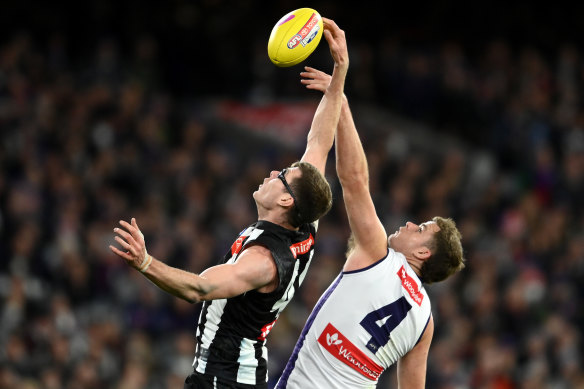 Mason Cox has relished playing in the ruck in 2022Credit:Getty Images

Geelong have won their past 14 matches and play the Lions, who sat in the top four after all but five rounds this season before winning their two finals.

Collingwood have emerged from 17th in 2021 under new coach Craig McRae, who declared the Magpies were in it to win it after their semi-final win over Fremantle. 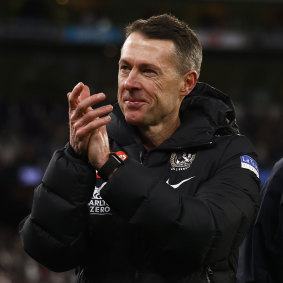 “I’m pretty relaxed, I’m not really a guy who stresses too much,” Cox said.

“You look at Geelong, who has been at the top a lot of the year, and they’ve got a lot of experienced and older players. They’re obviously probably feeling the pressure a lot more than someone like us, coming from 17th and with a younger team.”

The Magpies are not daunted at the prospect of playing on the Swans’ home deck, having altered their ground’s dimensions for training, so they match the SCG.

“It is different. It’s kind of unique in Australia, where you can have a field be different dimensions. It doesn’t make sense to me to sit there and not have a legal dimension of a field. Everything’s unique to the different places you play,” Cox said.

“Sydney is a bit of a smaller ground, we’re a high-pressure team, so hopefully that kind of plays in our favour but so is Sydney, that’s why they play that ground so well.”

Cox said post-game on Saturday that pressure would be the key to the result, with both teams emphasising that factor as the critical determinant as to who would prevail. He said that, despite the disappointment, the close loss to the Cats in the qualifying final had built belief.

“We proved to ourselves we deserve to be where we are at,” Cox said.

He also said he was relishing his move into the ruck, where he works in tandem with Darcy Cameron – having played most of his 93-game career so far as a forward and earning a reputation as a big game player with three-goal performances in the 2018 preliminary final and the 2020 elimination final.

“It’s a lot easier to tell if you are playing shit up forward, I’ll tell you that,” Cox said.

“There is nothing more frustrating than the ball not even going into the forward line, and you are just sitting there fiddling with your thumbs and just trying to get that one little opportunity to make something of it, whereas in the ruck you are constantly around the ball and constantly get a chance to make an impact on the game. I think it’s more enjoyable being a ruck than being in the forward line.”

Cox, who was speaking at a launch of Telstra’s touch and track system to assist visually impaired people, was active on social media earlier in the week, criticising the airlines “price gouging” as fans tried to get to Sydney for the match.

He is now in wonder at the lengths people will go to reach the game, including his family, who are flying out from Dallas to watch him in action.

“They’re [airlines] not doing any favours for the public,” Cox said. “A lot of people have found other ways to come up – they found a bus, they found a train or driving up or whatever it is. So it’s kind of crazy, I guess, how diehard fans are willing to go up there.

“My parents are flying from the US, so it’s probably a lot more expensive for them, from Dallas to Sydney, than it is to go from Melbourne to Sydney. The whole family is coming out, which is very unique because it doesn’t happen very often for the whole family to be here at the same time.”