The first thing you are reminded of when you see George Burgess in the gym beneath WIN Stadium is how big he is.

He is 129 kilograms. His biceps are enormous. He looks to be even taller than he was when he left the NRL and South Sydney at the end of the 2019 season to return to the UK. 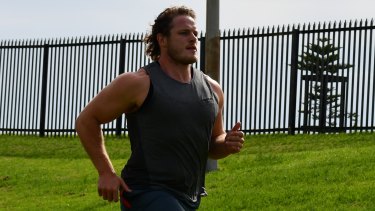 More importantly, he has a full range of movement in his right hip.

Burgess will join his new St George Illawarra teammates for the start of pre-season training on Wednesday. He has been going hard at it training on his own since August 8.

And he will quickly find out if the hip resurfacing surgery he underwent in England in April will be enough to save his rugby league career.

Burgess quit at the start of the year just eight games into his time at Wigan. He was convinced he had played his last game. 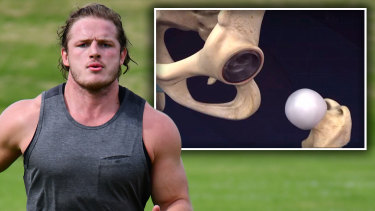 George Burgess is back in the NRL after undergoing hip resurfacing surgery.Credit:Dragons, Supplied

His hip had plagued him for the best part of a decade and no amount of cortisone injections or physio treatment were making it better.

“I was in agony most of the time and I wasn’t doing my family a good service trying to keep going,” he said. “I was always in a mood and depressed.

“I was booked for surgery on April 23 with Professor Damian Griffin, who is a top surgeon in his field. Jack McGrath plays with Ulster, he’s a front-rower, he had the surgery the following day and is now aiming to be back soon. Sean O’Brien is another player who had the surgery and he plays with London Irish now.

“But nobody in rugby league has come back to play from the surgery. A lot of people think hip resurfacing means game over. Hopefully, I can show them you can play on after it.”

When Burgess starts to describe the surgery, it sounds like a science fiction movie. The top of his femur was shaved off and a metal cap placed on top. Metal was then placed into his pelvis to act as the socket.

Rather than cut through his glute muscle to get to the hip, surgeons peeled the glute from the bone and then screwed it back once they’d finished. The man known as NRL Physio on Twitter, Brien Seeney, posted a computer-generated video of a hip resurfacing procedure to his 28,900 followers.

Burgess can feel the metal in his hip now. His hip buzzes when he passes through security gates at airports.

“It gives you this ball bearing feeling in there now, it’s weird,” Burgess said.

“But you get used to it. The hip needs to warm up differently, and you really need your glutes to fire up. But by the end of a session you feel great. I’ve been back running for about a month and I’ve been on the field the past couple of weeks. 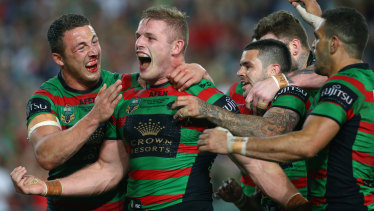 “By early December hopefully I’m doing everything possible, including contact. That will be the big test.”

Burgess won a premiership with South Sydney in 2014, scoring a vital try in the grand final, and knocked back a $2.4 million, three-year offer to join Parramatta in 2019 in the hope of remaining at Redfern. When things didn’t work out, he joined Wigan and has now returned to the NRL with the Dragons on the NRL’s $120,000-a-year minimum wage. The deal does, however, include incentives based on how many games he plays.

In the two years Burgess has been away from the NRL, heavyweight props have become an endangered species. A lot of them are now utilised off the bench, including Tom Burgess, George’s older twin brother by 15 minutes, who was spared the initial heavy exchanges and left to run amok in the middle of games during the final five weeks of the season.

Burgess knows he will be a presence in a pack that will be the oldest in the game. Coach Anthony Griffin has opted for age over youth with the likes of Francis Molo (27), Jack Gosiewski (27), Aaron Woods (30) joining Jack de Belin (30), Tariq Sims, Andrew McCullough and Josh McGuire, all 31.

Older brothers Luke and Sam retired before they wanted to and told George to chase his Dragons dream. Had no NRL club come forward, George was happy to have a few games with the Orara Valley Axemen on the NSW north coast where Sam will coach next year. He might have to wait a good few years for George.