The Melbourne Storm and Crusaders are set to take their relationship to the next level with regular pre-season player exchanges in the pursuit of continued excellence, the Herald can reveal.

The cross-code love-in between Craig Bellamy and Crusaders coach Scott Robertson has been well-documented over the years, with regular training visits, lunches and meetings at the Storm’s AAMI Park headquarters.

Robertson had Storm assistants Ryan Hinchcliffe and Aaron Bellamy in the coaches box during their Super Round win over the Rebels on Sunday night, then joked that Bellamy Snr was pressing him to take on five-eighth Cameron Munster in exchange for All Blacks No.10 Richie Mo’unga.

While a mid-season trade is clearly off the cards, the Herald can reveal the two teams are serious about sending players back and forth during the pre-season, with Mo’unga likely to be at the front of the queue after COVID-19 put a stop to the Crusaders playmaker making the trip in January this year.

Storm halfback Jahrome Hughes was one of the first to go, Bellamy sending him to Christchurch in 2019 for a week to work on his catch-pass with the 12-time title-winning Super Rugby powerhouse.

Robertson referenced the idea in Melbourne after observing the Storm’s captain’s run and team meeting on Saturday.

“We had [Test backs] Dave Havili and Will Jordan spend a couple of days with them this week,” he said. “They were blown away, both sides. It was a great experience for them. We might have to do a swap at pre-season just to keep things fresh.”

Bellamy and the Storm’s general manager of football, Frank Ponissi, sat with Wallabies coach Dave Rennie in a separate box to watch the Brumbies beat the Highlanders and the Crusaders fight back from a 13-0 deficit to trounce the Rebels six tries to two.

It was an experience the two Storm supremos relished. It is rare for coaches of that calibre, from two different but related codes, to watch a top quality match together without someone having a job to do in the moment.

Afterwards Robertson baited the waiting media with his Munster-for-Mo’unga quip – “I don’t know if we could handle Cam and with the salary caps and what Richie’s probably going to get paid I don’t think they could do that deal” – but he was serious about his respect for the NRL coach and the Storm’s legacy of success. 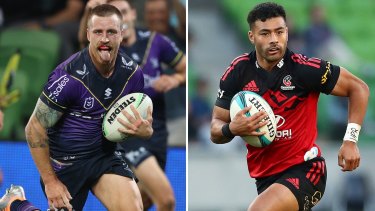 Richie Mo’unga, right, was due to spend a week with the Storm in the pre-season until Covid-19 intervened.Credit:Getty

“They’re just a real great club,” he said. “One year we used them as our theme, ‘purple reign’, [and] a lot of their trademarks and standards of behaviour that they use are really well-aligned, so we do a lot of work with them.

“You get in your own four walls a lot, you do what you get used to and each year you’ve got to find a way to get better. When you go to other teams, you might only get one or two little things, you might just tweak some of your philosophy, or it might be a really big idea you’re going to run with. When other people do it and you share those experiences, you get the best out of it.”

With four titles and several more grand finals to their name in a 23-year history, the Storm have found themselves a mecca for international sporting sides over the years. Ponissi first invited Robertson to Melbourne when he took over at the Crusaders in 2017.

Robertson, New Zealand’s break-dancing, flannel-wearing coaching cult figure, has led the Crusaders to three Super Rugby titles and two Super Rugby Aotearoa wins. He was regarded by fans as hard-done by after being overlooked for the All Blacks coaching role when Steve Hansen stepped down in 2019.

He gave a fascinating insight into the Storm’s methods after watching Sunday’s captain’s session, revealing Bellamy used every last opportunity to drill his side on detail.

“But it’s great, it’s just a different way of doing it. There’s no right way. You always learn little bits along the way, a bit of gold to pick up.”

The Crusaders weren’t able to watch the Storm take on the Warriors, flying to Sydney instead to prepare for the Waratahs at Leichhardt Oval on Saturday.