If anyone embodies the emergence of Geelong as a force in AFLW, it’s Nina Morrison.

Even those with a passing interest in the Cats will have noticed her bouncing mullet – no, it’s not an entirely natural curl – while more rusted on fans are familiar with her tough road to the finals series that kicks off on Friday night and continues when Morrison’s Geelong take on North Melbourne at GMHBA Stadium on Saturday night. 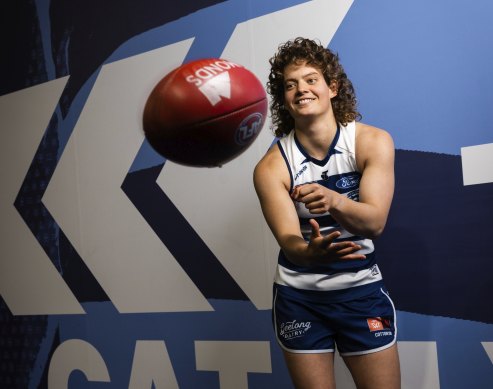 Morrison, the No.1 draft pick in the 2018 draft, has overcome two knee reconstructions to become one of the gun midfielders of the competition.

“It’s certainly been a challenge at different times over the last couple of years,” said the Geelong vice-captain.

“I guess the thing that I kept coming back to was being really motivated to get out there and just play the game that I know that I love.”

Now, let’s deal with the hair, which has brought added attention and is touted as the best mullet in the AFLW. Although Morrison has a natural wave, she does get a semiregular perm to keep those locks tight.

It’s Morrison’s football that’s grabbing the most attention, though.

In her first home and away season having played every round, she averaged 15.7 disposals, 6.1 tackles and 2.2 clearances per game while spending more time on the wing and rolling through to the forward line when needed.

She contributed to the scoreboard with four goals this season and scored a maximum ten coaches votes in her side’s one-point win against the Western Bulldogs in round six.

The 21-year-old’s football journey follows a similar trajectory to that of her club’s performance in the league, as both have had challenging starts and periods of doubt, but now are showcasing career/competition-best footy on the eve of season seven finals.

Back in 2019, Morrison was looking to be one of the league’s most influential players after being taken as the prized first selection. Her first game earned a rising star nomination and attracted ten coaches votes.

Less than a week later, she ruptured her right ACL at training and required a reconstruction.

After a lengthy rehab, which sidelined her for the rest of the season, she made her return in COVID-disrupted 2020, kicking a goal in her first game back against Fremantle. However, in the final-round game that year, she ruptured the same ACL, sending her back to the sidelines.

The following year was particularly hard for both Morrison and her side, as she was back in rehab, while the Cats only notched one win all season.

“It was really difficult that season five when I was not playing at all,” said Morrison.

“[It’s] probably no new news to anybody that we were sort of at our lowest point in terms of overall performance that year. And so that was certainly super hard to watch from the sidelines when you want to be able to impact and influence the group.

“As much as you can do throughout the week, when you’re not on the field or game it’s really hard to feel like you have much control, so that was certainly a difficult period to sit through.”

Morrison noted this time was a “really important to reflect on where the program was at”, while she was ticking off milestones in her own recovery.

Seven news faces arrived between seasons six and seven to replace those lost to expansion sides, including known goalkickers Shelley Scott and Jacqueline Parry from Melbourne, who bolstered the forward line.

Morrison said while this was “obviously a big significant change”, improvement also came from the players who remained, such as Chloe Scheer, who broke the club record for most goals in a game with four majors against Sydney in round 10.

“We really recognised as much as we needed some new players in and to add to areas of the list, the large bit of improvement was going to come from people that we already had, and I think that you’ve seen that over the last couple of years.

“A Mac [Amy McDonald] has had some really super seasons, Becky [Rebecca Webster] is now in her fifth season as well… You can list off many more.”

In the Cats’ final game of the home-and-away season, they booted the second-highest score in AFLW history in a 75-point victory over Sydney. That score seemed unimaginable for the side just a year earlier.

Now, Geelong are embarking on their second finals’ series and Morrison’s first. 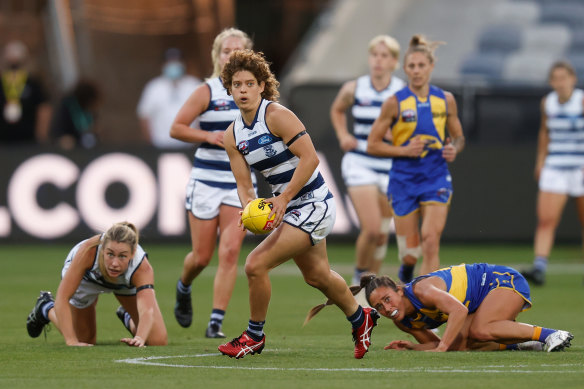 Nina Morrison of the Cats in action during the 2022 AFLW Round 05 match between the Geelong Cats and the West Coast Eagles.Credit:Michael Willson/AFL Photos via Getty

The Cats have never beaten the Kangaroos and the last time they met, in round four, North Melbourne claimed a 12-point victory.

However, Morrison says that was when the Cats started to hit their strides.

The following week Geelong beat St Kilda by 50 points, the same weekend as the men’s premiership, then won the next three games before being beaten by the reigning premiers Adelaide by two points.

Morrison said the success of the men’s program fed through to the women’s.

“The energy of the men’s finals, and then obviously winning the premiership, I feel like that has flowed through a lot of areas of the club and like round five, which was obviously the weekend that they won the premiership, was sort of, not a turning point but when we started to really hit our strides in the season.”