Melbourne Storm coach Craig Bellamy has floated the idea of switching Cameron Munster to fullback should the team struggle to adjust to life without injured star Ryan Papenhuyzen.

The Storm have named Nick Meaney at fullback for Saturday’s top of the ladder showdown with the Penrith Panthers, but Bellamy hinted he had other plans involving Munster, or utility back Tyran Wishart, should Meaney struggle to move back to the position after spending the bulk of this season on the wing. 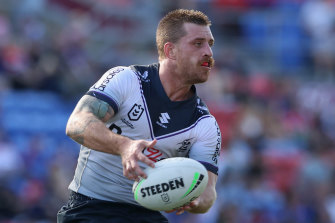 Could Cameron Munster be switched to fullback for a top of the ladder clash?Credit:Getty Images

Munster broke into the Storm side as a tearaway fullback when Billy Slater was injured for part of 2015 and most of 2016, before moving to five-eighth when Slater returned.

The Queensland playmaker has been arguably the NRL’s best player over the opening 10 rounds of the season, following a turbulent off-season where he was sent to a rehabilitation facility and returned fit and clear of mind.

Meaney trained at fullback during the pre-season and has played the role earlier in his career, so perhaps Bellamy is playing mind games with the Panthers. But Munster making runs from fullback could be a difficult cover for Penrith’s stingy defence.

“There are a couple of players who trained a fullback [during pre-season] because Paps missed a whole heap of time,” Bellamy said on Friday.

“We will just see how it goes tomorrow [Saturday]. If we have to make a couple of changes as we go then we have a couple of really versatile guys there.

“Munster has played there and we have practiced a couple of options this week, and it’s nice to have two or three guys who have played several different positions.”

Bellamy said Munster had made a couple of short cameos at fullback this season when Papenhuyzen was off the field.

“He’s gone there a couple of times this year,” Bellamy said.

“We will start a certain way but if that is not quite working out we can make some changes but, hopefully, what we have done this week will let it come together OK.”

Experienced outside back Marion Seve will come into the centres for the injured Reimis Smith and Bellamy said his form in the Queensland Cup was “outstanding”, which should allow him to handle the role.

The Storm are also considering bringing Fijian prop Tui Kamikamica into the side for his first game this season after he was put on the NRL’s no-fault stand-down after being charged with assault for an off-season incident in Queensland in November.

Those charges were dropped last month but the NRL integrity unit fined the prop $10,000, with $5000 suspended, and suspended him for nine games but considered the eight rounds he missed as part of that ban.

He has played one game in the Queensland Cup but Bellamy said the prop had trained so well throughout this season that he could still play a role off the bench.

“We wanted to add him to the squad and we will see where they takes us,” Bellamy said.

“He is a chance to play for us. It’s been a tough period for him.

“When he does get back into first grade, he will be as well-prepared as he can be.”

The Storm play Penrith Panthers at Suncorp Stadium on Saturday at 7.45pm AEST with Channel Nine to show the game live in Melbourne on its main channel.