The Warriors have fumbled another early lead in a 38-16 loss to Cronulla as NRL life under Stacey Jones began the way it ended under Nathan Brown.

Up 12-0 and playing sparkling football fresh off Brown’s abrupt exit, the Warriors completed just one set in the next 15 minutes as the Sharks ran in three tries.

A restart kicked out on the full didn’t help and another knock-on led to Matthew Moylan strolling over for a fourth try, before Sione Katoa made it five before half-time.

Winger Dallin Watene-Zelezniak sprung like a pole-vaulter to conjure a Warriors try to begin the second half and offer some hope.

But again mistakes crippled their comeback in Redcliffe, with Sharks fullback Will Kennedy planting a loose ball fumbled by opposite number Reece Walsh a staggering eight times before he finally dropped it.

Walsh was otherwise impressive, playing with confidence and breaking a 15-game scoring drought with his first-half try. 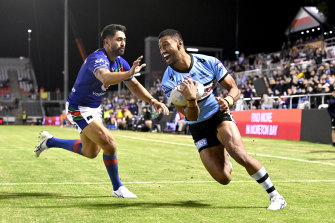 Ronaldo Mulitalo crosses for one of his two tries against the Warriors in Redcliffe.Credit:Getty

Earlier Ronaldo Mulitalo was awarded his second try on review, somehow keeping his leg in the air over the sideline to the approval of the bunker, who reversed the on-field, no-try soft ruling.

With Katoa completing a hat-trick, Cronulla scored eight tries to three. The fact many were scored near the sideline, however, didn’t help the goalkicking of Nicho Hynes, who made just three off the tee.

The Warriors’ inconsistent night followed the script of their last meeting at their adopted home against Newcastle a fortnight ago and ensured caretaker coach Jones plenty of headaches as they look to salvage a 4-10 season.

Victory for the Sharks (8-5, fifth) meant they avoided a first back-to-back loss of the season.