In today’s AFL briefing, your daily wrap of footy news:

Come back for updates throughout the day.

Star forward back for Blues

Carlton forward Harry McKay will make a quicker-than-expected return from injury and hopes to be a party pooper in Friday night’s clash against Essendon at the MCG.

McKay was found to have a lateral meniscus tear in his knee after the win over Adelaide in round eight, with the Blues at the time expecting him to miss six weeks. However, the injury has healed well after surgery and McKay has ramped up his training this week. 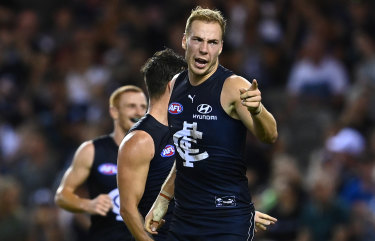 Back in business: Harry McKay has made a quicker-than-expected return from injury.Credit:Getty Images

Coach Michael Voss confirmed on Thursday the Coleman medallist will be back to face the struggling Bombers in their 150th anniversary clash.

“He’s been fairly uninterrupted with his preparation. He’s an absolute pro so that’s given him the best chance to get out there. He came off the operation quite well and that’s always a great start, plus he was able to get into his rehab fairly quickly,” Voss said. 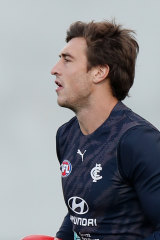 Defender Caleb Marchbank will return after almost three years on the sidelines.Credit:Getty Images

“He’s maybe a week or two ahead of where he should be but, if you ask Harry, he always had an eye on this round.

“We’re pleased he’s back. We’ve done a fantastic job trying to manoeuvre our team around and there’s been some flow-on effects, but we can get our team settled again in the front half and around the ball.”

Voss also said that defender Caleb Marchbank, who has not played a senior game in almost three years, will also return. Marchbank last lined up for the Blues against Melbourne in round 16, 2019.

The versatile backman missed the rest of that season with a neck fracture, before his 2020 campaign was derailed by bone bruising in his knee. He had a knee reconstruction last year after an injury in the VFL. Marchbank’s return eases the backline issues for fellow talls Jacob Weitering, Oscar McDonald and Mitch McGovern are hurt, while playmaker Zac Williams is also absent.

“I’m really looking forward to watching him [Marchbank] on Friday night. It’s going to be an awesome atmosphere for him,” Weitering said.

“It was 2019 which was his last game of football — he has been put through the ringer. He’s had some strange injuries – a neck injury, knee, ankle and it’s been consistent.”

Weitering’s absence will still hurt. He has arguably been the league’s best defender this season. His one-on-one work has been pristine, for of the 27 one-on-one defensive contests he has contested, he has only been outmarked just once – ranked No. 1 for defenders.

‘Pretty cool’: Grimes to celebrate milestone with new boy on the block

Richmond co-captain Dylan Grimes will have much to celebrate on Thursday night when he runs out for his 200th game, but he is particularly looking forward to sharing it with a largely unknown Tiger.

Grimes, 30, will share the Marvel Stadium stage against Port Adelaide with Judson Clarke, the teenage half-forward-midfielder who was taken with the Tigers’ fifth pick – 30th overall – in last year’s national draft. 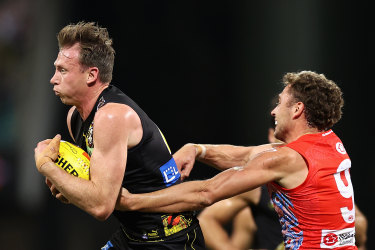 Richmond co-captain Dylan Grimes will celebrate his 200th match when the Tigers face the Power on Thursday night.Credit:Getty Images

“That will be pretty cool to run out with someone in my milestone and their first milestone as well,” Grimes said on Wednesday.

However, the Tigers, seeking to rebound from a disappointing loss to the Swans, have made a selection statement, axing Jack Ross, Maurice Rioli jnr and half-forward Jason Castagna.

Premiership stars Noah Balta (hamstring) and Marlion Pickett return from injury. Swingman Balta and the dashing Pickett have not played since round nine but Kane Lambert, dealing with a chronic hip injury, did not win a call-up, despite coach Damien Hardwick flagging his return earlier in the week. Lambert is an emergency.

Clarke, a Dandenong Stingrays product, is a hard-running left footer and has impressed in the VFL with his clean disposal and ability to break the lines. He has averaged 14.3 disposals in nine VFL matches and booted 11 goals, including a season-high four against Footscray in round three.

The Power will not have a frontline ruckman, omitting Sam Hayes after he played seven games this season with Scott Lycett out injured. Forward Jeremy Finlayson has been named as the starting ruck, with Todd Marshall and Charlie Dixon as the key forwards.

While Clarke deserves praise, the loudest cheer will be for Grimes, the Tigers’ first pick (No. 2 overall) in the AFL pre-season draft of 2009 who has gone on to become one of the league’s best defenders and enjoy three premierships.

Handed the captaincy alongside Toby Nankervis this season, it seems unfathomable to think Grimes was on the verge of retirement before his career had hit the runway because of persistent hamstring issues. At one point, he emailed Tigers official Wayne Campbell before his second hamstring tendon surgery, questioning whether he could endure six months of recovery again.

“I distinctly remember one moment, Wayne Campbell was our leadership coach, and I told him I was one hamstring away from retiring. I think I was 21 at that stage. It sounds ridiculous looking back at everything else that has happened,” Grimes said.

“I think you get through the hard times with the help of your teammates and you forget how hard they were. This milestone means a lot to me, for a lot of reasons.”

Between 2011-13, Grimes managed to play just 25 of a possible 67 senior games because of hamstring issues, and was sent to Germany to spend time with German doctor Hans-Wilhelm Muller-Wohlfahrt for expert treatment. This involved a series of injections, including an extract of calf’s blood and an anti-inflammatory, into his lower back.

Progress was made, and Grimes’ story is well known from there, including the ultimate success as a team and individual honours, including All-Australian selection and a Jack Dyer Medal.

“I am really excited to play a milestone game. I think it’s a culmination of a lot of years of hard work by me and the footy club as well,” Grimes said.

“I am so grateful to Richmond. They took a punt on me back in 2009 and I have been lucky to be here ever since. This club has made me who I am and I am just super grateful to run out there again this weekend.”

Fresh after the mid-season bye, the Tigers resume outside the top eight but remain a premiership threat, particularly if they can tighten defensively, as Hardwick outlined this week.

“We have seen at the beginning of the year when we play our best footy we are competitive with the best sides. Being more consistent with that, particularly in the latter stages of games, being able to execute, [is what we want],” Grimes said.