Twelve months on from his bitter exit from the club, Benji Marshall has settled his differences with the Wests Tigers and agreed to return in an official capacity in 2022.

In the same week Tim Sheens returned from England to begin his duties as director of football, the Herald can reveal his protégé has also signed to return home in a major boost for club morale. 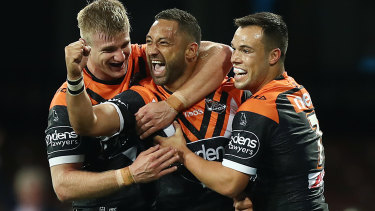 Benji Marshall is on his way back to the Wests Tigers next year.Credit:Getty

While Marshall won’t be dusting off the boots, the Tigers’ iconic figure has agreed to a third stint at the club to help them both on and off the field from next season.

Marshall’s role at the Tigers is wide-ranging, but will play a major hand in developing some of the club’s young talent into regular first-graders.

It’s unclear how much he will be involved with the NRL side, particularly given how his relationship with coach Michael Maguire soured last year after he was told his contract would not be extended. Sheens will have a huge say in how Marshall is used by the football department next year.

Club powerbrokers, in conjunction with Wests Ashfield Leagues club and long-term sponsor Allied Express, have been working behind the scenes for a number of weeks to repair the relationship with Marshall and return him to where they believe he belongs. 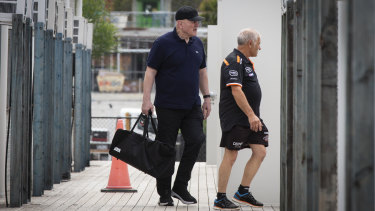 Tim Sheens at Wests Tigers headquarters on his first day back at the club in nearly a decade on Monday.Credit:Sydney Morning Herald

There was speculation Marshall was being considered as an option to join the football staff of mentor and former coach Wayne Bennett at the Dolphins in 2023, but the Tigers were desperate for him to have a long-term relationship with them given his status and achievements in the black and gold since debuting in 2003.

As part of his role, Marshall will also be used as an ambassador to assist with corporate backers and sponsors.

"Everyone at the Wests Tigers wanted it to happen," Wests Ashfield chief executive Simon Cook told the Herald.

"Benji Marshall is such an important part of our history, but we wanted him to be part of our future as well. He belongs here at the Wests Tigers.

"When we reached out to him it was clear that the club still holds a special place in Benji's heart. Everyone's looking forward to working with him in whatever form that may be."

Wests Tigers chairman Lee Hagipantelis said he was not concerned about the events that led to Marshall’s exit last year and believes there will be no issue from next season.

"We're dealing with professionals," Hagipantelis said. "What's happened in the past is in the past. I have no doubt Benji's heart lies with the Wests Tigers. Always has and always will. He has made it absolutely clear that his passion and desire is to see the very best for the Wests Tigers, and that is what we all want."

"There are very few who exemplify Wests Tigers DNA the way Benji Marshall does," Hagipantelis said. "He has proven and will continue to prove an incredible asset for this club both and off the field.

"His ability to generate interest and excitement for this club is unparalleled. His return, together with Tim Sheens, is a huge injection of Wests Tigers DNA. We're very much looking forward to his input and contribution with the club moving forward in his new role."