Michael Maguire and Kristian Woolf have emerged as the frontrunners to take over at the Warriors after departing coach Nathan Brown conceded his days as an NRL head coach were over.

On a dramatic day for the NRL, Maguire and Brown parted company with the Tigers and Warriors respectively. Both were under pressure due to disappointing results, with the decisions ending ongoing speculation about their futures. In Brown’s case, the parties came to a settlement after he said he couldn’t commit to relocating to New Zealand in the long term.

Maguire barely had the chance to clean out his desk at Concord before he was being linked to the Warriors. The premiership-winning mentor has a strong connection with New Zealand as coach of the national team, which he has guided to top spot in the world rankings ahead of the upcoming World Cup.

Woolf, meanwhile, is building a reputation as one of the game’s most promising young mentors. His St Helens side sits on top of the Super League ladder after winning the premiership the previous year and is at the helm of a Tongan national team that has beaten the Kangaroos and Kiwis in its most recent appearances.

Warriors CEO Cameron George said he had heard the rumours about Woolf but had not yet entered into dialogue with prospective replacements for Brown.

“There are plenty of people out there who are looking for an opportunity,” George said. “We just want to take our breath for the moment. I heard a number of names, I’ve heard Kristian’s, but I haven’t spoken to Kristian at all.” 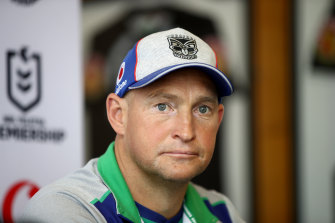 Gone: Nathan Brown has finished up at the Warriors.Credit:Getty

Asked what attributes he wants from the new coach, George said: “We’re not scared of a newbie, a rookie, if you like.

“There are plenty of tremendous assistant coaches around the game who are learning in very good systems and have good connections with up-and-coming players.

“To be honest – and I’m not talking about the past at all – I want to see someone with a hard edge, a bit of a hardarse. We need to instil that fabric – we need to steel up that defence and our attitude and that’s right across the board.

“Bringing that hard edge would be really good and everyone carries that in their own way. I just like a simple approach to footy; if someone comes to us without over-analysing it and presents well and has a simple philosophy with effort-based areas, they are really key attributes that could help our club.”

Trent Barrett was moved on from Canterbury, taking the number of coaches turned over to three already this season.

“There comes a time in life where my family has to be more important than my coaching career,” Brown told Nine news. “That’s the reality of it, I make no apologies for that.

“My eldest daughter went to 11 different schools and changed schools in year 12. My family made all the sacrifices for me and it comes to hopefully move into another field of rugby league.”

Brown said he had retired from head coaching and his ideal role would be to assist other mentors coming through the ranks.

“My coaching has come to an end,” Brown said.

“Maybe I can help someone stay employed.”

Warriors legend Stacey Jones, formerly an assistant, will take over from Brown in an interim capacity.

“Certainly things need to change as far as performances go,” said Jones, who deflected questions about whether he wants the job on a permanent basis.

“I’m going to put a lot of work into it. My message to the group is we need to get the simple things right first. Our effort, what we’re doing there, is way off the mark.”

The Warriors have now parted with five coaches – Matthew Elliott, Andrew McFadden, Stephen Kearney, Todd Payten and Brown – during the past decade. There has also been a constant turnover in support staff, including Phil Gould, although George denied there were any underlying issues.

“I take a lot of responsibility and I’m very passionate about this footy club now and into the future,” George said.

“Whilst we have been trying to survive in a lot of aspects of our footy club, it doesn’t give us a free pass for not winning, we haven’t got that right …

“Since [Covid], we haven’t been able to field any other team except the NRL team … when we can get home and reconnect with all of those facets of our business, it will be much better for our footy club to succeed.”