Eight years after departing the Western Bulldogs to join Carlton, Liam Jones will return to the Whitten Oval after the club confirmed he will join them as an unrestricted free agent during this year’s free agency and trade period.

The 31-year-old retired at the end of last year after the AFL brought in a COVID-19 vaccination policy that made it compulsory for all players to receive the vaccine to play in the AFL in 2022.

His decision came as a shock as he had resurrected his career at the Blues as an intercept-marking defender after appearing to be on football’s scrapheap midway through 2017 before Collingwood assistant Josh Fraser, who was then coaching the Northern Blues, suggested he switch from attack to defence. 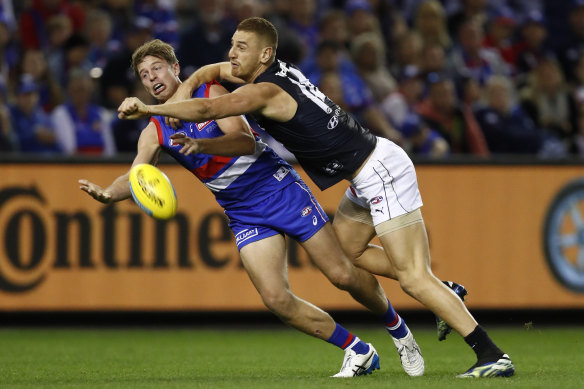 Jones became a mainstay of the Blues’ back line and a fan favourite until his decision to step out of the AFL in 2022, choosing to play for Palm Beach-Currumbin in the QAFL.

Several clubs met with him when he indicated his desire to return to the AFL after the mandatory vaccination policy was dropped due to the high rates of vaccination in the community, but he decided to sign what industry sources said was a three-year deal with the Bulldogs.

On Thursday, the club formally declared he would join as an unrestricted free agent, with the Blues to receive compensation for his departure. That free agency compensation is expected to be used as part of the deal to get Fremantle wingman Blake Acres to the Blues.

The Bulldogs’ statement said the club “will work with Jones and his management to facilitate a move within the trade and free agency period” after he declared them to be his preferred destination.

Jones made his debut in 2010 after being pick 32 in the 2008 national draft and played 66 games with the Bulldogs and 95 games with Carlton. He departed the club while Brendan McCartney was coach and returns under premiership coach Luke Beveridge.

Mitch Wallis, Jack Macrae, Tom Liberatore, Lachie Hunter and Marcus Bontempelli all played in Jones’ final game at the club and were still on the list in 2022, with Wallis yet to re-sign.

The Bulldogs are coming off a disappointing season, having lost the elimination final after finishing eighth a year after making the grand final.

Apart from Jones’ arrival they will look to secure a trade for contracted Fremantle forward Rory Lobb while waiting for a decision by midfielder Josh Dunkley, who looks certain to leave for either the Brisbane Lions or Port Adelaide, and Norm Smith medallist Jason Johannisen, who has attracted interest from the Gold Coast. Dunkley has had a long-term offer from the Bulldogs on the table for the past two months.

They have re-signed Rhylee West, who overcame his disappointment at being left out of the final round and elimination final to re-commit to the club, while Zaine Cordy is also expected to remain.

Jones and the Lions’ Cam Ellis-Yolmen were the only two players in the men’s competition who decided to stand out of the game rather than be vaccinated, while the Kangaroos’ Jed Anderson and West Coast’s Jack Darling rejoined their clubs late in pre-season after eventually agreeing to have the jab.