Four-time premiership coach Kevin Sheedy has been named an Immortal of the Essendon Football Club at Saturday night’s function to celebrate the club’s 150th anniversary.

The 74-year-old became an official club legend in 2008, the year after he finished a 27-year coaching career at the Bombers that began in 1981. 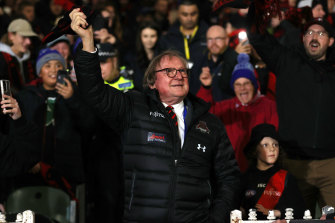 Kevin Sheedy.gets the Essendon faithful waving their scarves in celebration of their club.Credit:Getty Images

Bombers president Paul Brasher said Sheedy deserved such status for transforming the local club into a diverse organisation with reach beyond Essendon.

“Kevin’s passion, dedication, determined and pride in expanding Essendon from a suburban to truly national sporting organisation has helped ensure the Essendon Football Club will remain a preeminent club long into the future,” Brasher said.

Sheedy is the only person to coach the Bombers to a finals win since 1968 but his innovative approach to coaching the team and marketing the club has made him one of the game’s most influential people. 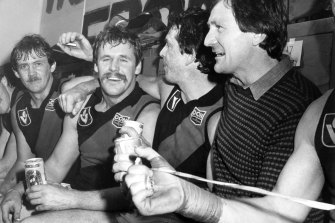 The former coach now sits on the club’s board and is charged with reviewing the current football operations alongside former players Simon Madden and Sean Wellman.

He raised eyebrows last week when he suggested the AFL owed the club an apology for how they were treated in the drugs saga that has dogged Essendon for the past decade.

Brasher said it was not only Sheedy’s coaching record that earned him the Immortal honour.

“We particularly acknowledge Kevin’s contribution in winning four VFL/AFL premierships as a coach, as well as his significant role in establishing annual marquee matches including Anzac Day, Dreamtime and the Country Festival games,” Brasher said.

“Importantly too, we recognise the influential role Kevin has had, and continues to, in developing and nurturing players of all backgrounds and cultures in his four decades of involvement at the Essendon Football Club.”

The Anzac Day match against Collingwood began in 1995 and the Dreamtime at the ’G was first played in 2005.

Wanganeen told The Age on Friday night that Sheedy created the opportunities for players such as himself and teammate Michael Long to flourish after they arrived from Adelaide and Darwin.