North Melbourne midfielder Ben Cunnington will have chemotherapy after a routine post-surgery check-up detected a secondary cancer this week.

The 30-year-old had surgery in July after a testicular tumour was discovered but will now enter a nine-week stretch of chemotherapy. 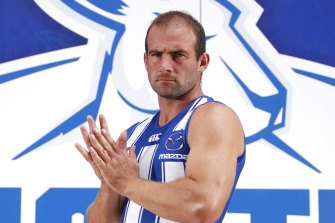 However, the Kangaroos said in a statement that Cunnington was expected to make a full recovery.

Cunnington became emotional after finishing runner-up in the club’s best and fairest this season behind Jy Simpkin despite playing just 15 matches, with his response reducing many of his teammates to tears.

He admitted the award carried special significance to him given the personal challenges he faced.

“Just to have the support from the club, the players and my beautiful family. I could not have done it without them,” Cunnington said.

He has played 227 games for North Melbourne and is enormously respected at the Kangaroos and throughout the AFL.

The Kangaroos said he had their full support and asked that Cunnington’s privacy be respected and they would not be making any further comment.