Payne Haas has flagged his intention to remove alcohol and gambling advertising from his jerseys in the future on religious grounds.

Due to Haas’ Islamic faith, the NSW prop is keen to follow in the footsteps of friend Sonny Bill Williams, who sought to distance himself from advertisers that didn’t align with his beliefs.

Haas hasn’t made any requests to the NSWRL to cover up betting or beer sponsorships on the jerseys the Blues will wear in the opening State of Origin match on Wednesday night. However, it’s a subject he intends to broach with the Blues and Broncos at some point as continues to grow into his Muslim faith.

“There is going to be a time when I’m going to align with it and I want to be a leader for Islam and for Muslims,” Haas told the Herald.

“Hopefully I can do that one day, inshallah, God willing and can be at the forefront of that, the way Sonny is at the moment. 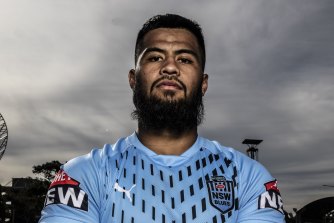 “If I get everything in order in my life, I want to be a leader in that way as well.”

Towards the end of his league and union career, Williams requested that gambling, banking and alcohol sponsorship be removed from his jersey. Understanding his reasons for doing so, the sponsors complied. Australian cricketer Fawad Ahmed is another sports star who was granted a request to have beer sponsorship removed from his uniform on religious grounds.

“Where they are at in their lives, they have gone with Islam,” Haas said. “At the end of the day, I want to end up like them as my faith keeps continuing and as I grow as a Muslim.

“For Sonny and all of them, they’ve probably seen it happen to their families and friends. They have wanted to lead by example to fellow Muslims – not only Muslims but everyone.

“If I can help just one person out, save them from that kind of lifestyle, then I’m doing my job.”

“I think everyone is pretty understanding, which is good. Everyone has their own beliefs and if everyone respects that, it will be good for everyone.

“I know [sponsors] come in with a lot of money, but it’s just more about helping people. If I can help just one person out, save them from that kind of lifestyle, then I’m doing my job.”

During Ramadan, Haas completes all of his Broncos training commitments while abstaining from all food and drink from dawn to sunset.

“I’ve done it for four years now, it’s a blessed month,” Haas said. “I did it at the start of this year, lost a lot of weight, so I had to put it back on.

“I dropped about five kilos. I don’t like playing too light, especially in my position where you cop a lot of knocks, it’s a bit better [when you’re heavier].

“I’m used to it now. When I first started Ramadan it was a bit hard because it’s so hot, but now my body is pretty used to it. It’s not as hard [now].”

The parallels between the careers of Williams and Haas are obvious. Both were considered the best young forward in the game when they made their way into first grade, attracted attention for the occasional slip-up off the field and then found the Muslim faith.

“It’s good to have someone like Sonny to lean on,” Haas said. “He’s had the same kind of stuff that I’m going through. If I’m going through some stuff, I can lean on him for advice on how I can do better.

“Islam is a way of life. It’s like anything, nothing comes overnight. I’m still learning my way with Islam. It’s a beautiful religion and any of my wrongdoings, I don’t want it to be put on Islam, it’s on myself.”