Melbourne conceded their inability to finish games caught up with them in the finals after the Brisbane Lions chased down the Demons’ 22-point first-half lead to eliminate them from the premiership race in straight sets.

They entered the game having conceded 97 points more than their opposition in the final quarter since round 11 and could not keep up with the Lions in the last quarter when they were outscored by the winning margin of 13 points. 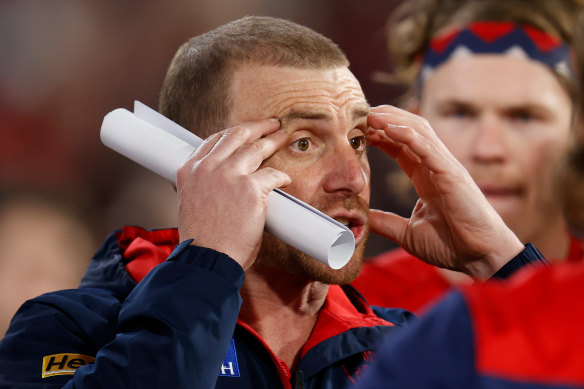 Demons coach Simon Goodwin admits their vulnerabilities were exposed in the finals.Credit:AFL Photos

Demons coach Simon Goodwin said the result left the team feeling “an emptiness” as they had failed to give their fans the chance to experience a premiership win at the MCG after their drought-breaking win at Optus Stadium last year.

“Teams have been able to impact in the second half of games and mow down leads and it happened again … it is certainly not a shock. That has been a pretty consistent theme for us when we have been beaten,” Goodwin said.

Goodwin said the team failed to handle the expectation that arrived after their flag and their “vulnerabilities were exposed” in the finals.

“We knew heading into this year that expectations would be high. We knew that pressure around this footy club would be high and that is why it’s really challenging to be really successful when you come off what we have come off and that is why not many teams [go back to back],” Goodwin said.

Melbourne’s bad habit of fading out of games this year had fortified the Brisbane Lions as they fought back to claim their first MCG for eight years and knock the reigning premiers out of the 2022 race.

“Melbourne’s second halves this year have not always been the best,” said elated coach Chris Fagan. “We were aware of that, so we gave ourselves a chance at half-time and played a brilliant second half.

“I thought we were in a bit of trouble early. Melbourne were all over us, probably a bit fortunate they didn’t kick straight. Then we clicked into gear in the second quarter and were in the game at half-time, which gave our group some confidence.”

Melbourne had twice thrashed the Lions this season, most recently in round 23. Fagan said his team had allowed themselves to be distracted by a war of words surrounding that match. Regrouping to play and beat Richmond in last week’s elimination final, they had resolved to narrow their focus. Now they are in a preliminary final. 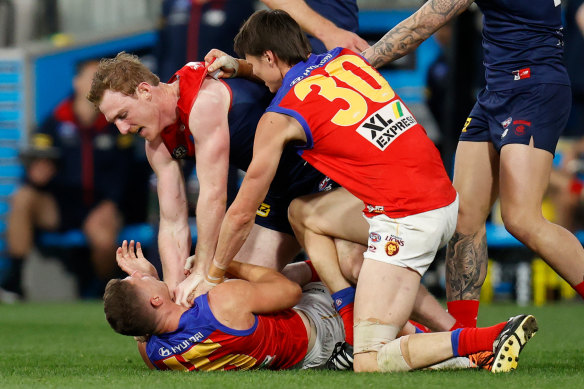 The Brisbane Lions and Melbourne had a fierce tussle at the MCG before the Demons’ season ended.Credit:Getty

“It’s a remarkable turnaround in two or three weeks,” Fagan said. “It goes to show sport [is] fantastic, isn’t it?”

Not so fantastic for Melbourne, with Goodwin saying they were trying to fix issues that were arising in the back half of the season when they failed to cash in on their momentum early in games and left the door open for the opposition.

“We tried to address it on the run throughout the season. We weren’t able to do that to the level where we could get results,” Goodwin said. “In finals, it’s funny, your vulnerabilities find you.”

Brisbane has an appalling record at the MCG and a poor recent finals record, but Fagan said both were overplayed.

“Some good teams play at the MCG, so it’s not that easy to win here and we don’t play here that often,” he said. “We’re lucky we’ve had three goes in the last nine or 10 weeks. It probably helped us.

“We were getting a bad rap for our finals record. The truth is we lost one game by a point and another game by three points. A whisker away from two more prelims. I don’t see those as bad losses. I’ve always had faith in this group that we could find a way.”

Fagan praised the games of Eric Hipwood, who had to step up after the late withdrawal of Joe Daniher, and stand-in ruckman Darcy Fort, as well Jarrod Berry, who moved onto Clayton Oliver at half-time and played a decisive role.

Fagan said Berry had texted him last weekend asking to play on Oliver. Fagan decided initially to stick with Plan A, Dev Robertson, but switched at the long break.

“It was a very important move and I won’t take credit for it,” Fagan said. “Cam Bruce, who joined our coaching staff this year, suggested it, forcefully and I took his advice. It ended up being a great move.”

Fagan said his team would relish the challenge of playing a rested and in-form Geelong. However, Berry might have a nervous wait as the match review officer assesses an incident where he appeared to run his hand across Oliver’s face with a mark left near Oliver’s eye.

The Lions’ Lincoln McCarthy also appeared to mock Melbourne’s Harrison Petty near the end of the match for crying after he was verbally sledged during their previous encounter at the Gabba.

“We’ll have our work cut out, but we’ll come with the same attitude we came with tonight and give it our best shot,” he said.

“Generally speaking, we’ve had close games the last couple of years. We’re starting to be more competitive against them. We’ll need to be, they’re in great shape.”

Fagan also pre-announced the birth of Daniher’s daughter in Brisbane. “We get a fresh Joey Danhier next week and we had a good win tonight,” he said.

“You couldn’t get a better day than that, could you?”