Where will the Cats v Pies match be won and lost?

Collingwood play exciting and attacking footy, but can it stand up to the pressure of Geelong’s defence? 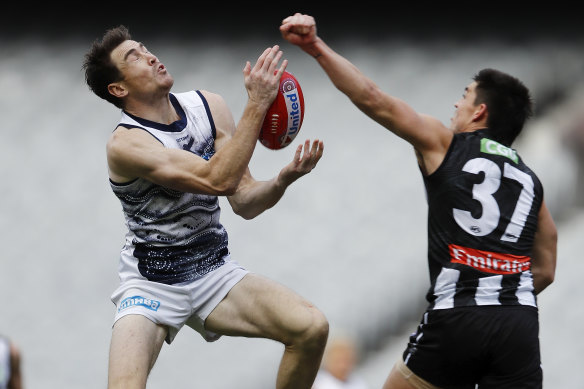 Expect a frenetic pace to start the game. Collingwood are a forward first team, playing fast and direct, but Geelong’s retreating defence is likely to cause issues for the Pies’ ability to transfer the ball quickly. The Cats will give the Pies opportunities to control the ball in patches and this may be a good tactic to reduce the impact of Geelong’s intercept players, Tom Stewart and Sam De Koning.

Collingwood, however, have been one of the most efficient teams going inside forward 50, and will need to rely on this efficiency if they are a chance to knock over the Cats, one of the best teams at limiting scores against.

The pressure and speed of the Pies may cause problems early for Geelong, however once the Cats settle, their ability to control the ball across half-back will set up opportunities to score for their potent forward line, headed up by the three recent All-Australian players Tom Hawkins, Jeremy Cameron and Tyson Stengle. The experienced and well-rounded team defence and controlled ball movement in the back half is where Geelong can dismantle the Pies.

Who is the X-factor for each team?

For Geelong, you can’t go past Stengle, the small forward who last week picked up his first All-Australian guernsey. Now at his third club, he is showing the footy community what he is capable of, under the mentorship of Eddie Betts. Stengle has reached new heights this season averaging just over two goals a game. He has added a much-needed spark to the Geelong side, described last year as slow and old.

There’s been a lot of chatter about Jack Ginnivan, the polarising Pies small forward who will thrive in a packed MCG, but Ash Johnson could be the surprising X-factor. In recent matches Johnson’s ability to hit the scoreboard at crucial times shows he can hold up under immense pressure. Like Stengle, he is an incredible story of resilience, and it will be exciting to see what he brings to the big stage.

It would also be remiss not to mention Jamie Elliot who has had clutch moments during the season. If there is a kick after the siren to win the match, Cats fans will hope it’s not with Elliot.

How can the Pies stop Hawkins and Cameron?

There is no bigger task in footy than taking on Geelong’s big forwards. Forwards are usually reliant on smooth ball movement, so if the Pies can pressure the ball carrier, as they have all year, this will allow Darcy Moore and Jeremy Howe to come off their opponents and assist in the air. The Pies will also need to be aware of Geelong’s smalls, with Gryan Miers and Stengle lurking around as the ball comes off the pack. The Cats will need to watch out for Collingwood’s wingers, Steele Sidebottom and Josh Daicos, getting back to support their defence and cutting off the leading lanes to Cameron and Hawkins.

What coaching moves can we look out for from Craig McRae and Chris Scott?

Given Geelong’s retreating defence, when the heat is on early Collingwood may look to control the footy by foot, owning possession and not playing into the hands of Geelong’s interceptors. If they continue to play quick, it may open the door to Geelong being able to intercept and rebound the ball off the back half. Collingwood are also traditionally a high handball team in the back half, and often exit the defensive 50 via the boundary. To prevent Geelong settling behind the footy, the Pies may look to kick the ball more from the back half and look more centrally to change angles and shift the Cats defenders out of position.

Despite starting the year off with faster and more direct ball movement, in recent weeks Geelong are starting to have more control on the ball, electing to go more to the boundary. If this approach doesn’t go to plan, expect Geelong to be able to flick the switch and play more direct footy through the corridor.

And where is Mark Blicavs likely to end up? Don’t be surprised if he shuts down Nick Daicos. The Pies midfielder and Rising Star winner has shown his class this year with his skills and elite running capacity proving to be a weapon for the Pies. It must be a joy for Chris Scott to have a versatile player like Blicavs at his disposal.

Can the Pies lift their clearance game?

Based on clearance statistics, it is surprising that Collingwood are in the top eight, let alone top four. Stats, however, can be deceiving and despite centre bounce clearance numbers being below average, the Pies’ post-clearance numbers would be pleasing the coaching staff.

The Pies’ ability to get their hands on the footy after a clearance and surge forward from the contest is a huge reason for their success, and not too dissimilar to the blueprint of Richmond during their successful years.

The Pies’ around-the-ground stoppage numbers have improved in recent weeks, but if they have any chance of winning, they must nullify Geelong’s clearance work and outwork their opponents from contest to contest.

My tip: Geelong by three points.Click here to see The Age experts’ tips for week one of finals.