Collingwood, last year’s 17th-ranked team, are one win away from a fairytale grand final berth after overwhelming Fremantle at a heaving MCG.

The final 20-point margin didn’t truly reflect the dominance of the Magpies, who booked a date with Sydney in next Saturday’s preliminary final at the SCG via a ferocious start, an ascendant midfield, a backline that ruled the airwaves and a 90,612-strong crowd bedecked predominantly in black and white.

The Dockers, so brave in overcoming a 41-point deficit a week earlier against the Western Bulldogs, finished strongly to take some of the gloss of what could – and should – have been a heftier margin.
But when the heat was on, they had no answers for Collingwood’s torrid assault led by Jordan De Goey.

After entering the match under a cloud courtesy of a sprained shoulder suffered against Geelong, De Goey proved a powerhouse, rotating between the centre square and attack. His bullocking work in the centre square gave the Magpies an unlikely edge at the clearances, while his play-making entering forward-50 could hardly have been more precise.

Quiet last week against the Cats, Jack Ginnivan (three goals) stepped up on the big stage he looks so readymade for, while Jack Crisp, Jamie Elliott and Brody Mihocek (two goals each) shared the rewards, often set up by De Goey’s upfield brilliance. At the other end, Jeremy Howe and Darcy Moore had too much for Fremantle’s forwards to handle. 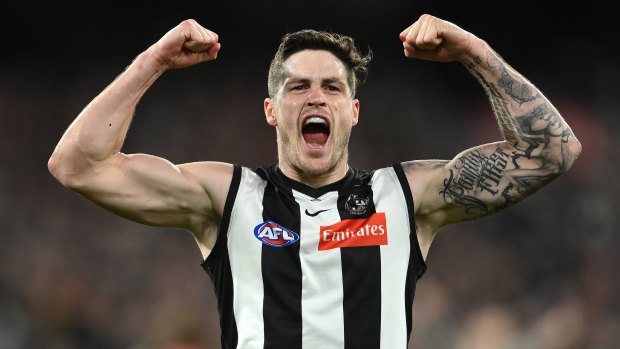 Jack Crisp celebrates a goal against the Dockers in the semi-final.Credit:Getty Images

Collingwood’s ball use from the outset was brave, blistering and corridor-focused.
Conversely, Fremantle’s predictable, labour-intensive ball use, particularly in the first half, would be best described as stagnant, slow and sideways.

The third quarter was played wholly on Collingwood’s terms, but a run of nine successive behinds kept Fremantle in the hunt.

Ginnivan’s second goal – a clever left-foot shark off hands – ended that run of outs, before De Goey skilfully set up Mihoek’s second in the shadows of three-quarter-time.
Andrew Brayshaw, Caleb Serong and Blake Acres continued to work tirelessly and all enjoyed strong periods, especially in the second half, while Michael Walters and Michael Fredericks fired for cameos, but the early damage inflicted was too critical.

END-TO-END STUFF
The match was 71 seconds old when Ginnivan soccered through the evening’s opening goal, deserved team reward for a grand end-to-end chain which set the scene for Collingwood’s first half of domination.
Darcy Cameron’s deft tap inside Fremantle’s attacking 50 was roved by Crisp, who got the ball back again after involving Nick Daicos and captain Scott Pendlebury.
From Crisp, to De Goey, to John Noble, the ball found its way to Mason Cox, who marked and drove the Magpies inside-50 where Ginnivan got out the back to score, no Docker touching the ball in the process. 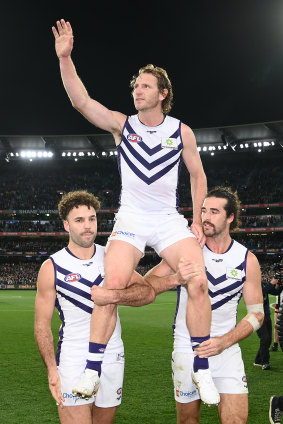 David Mundy is chaired off in his final game. Credit:Getty Images

KNEE WORRIES
Fremantle fans’ hearts were in their mouths late in the opening quarter when a grimacing Brayshaw’s right knee twisted on impact when Pendlebury came sliding in.
Then in the second term, wingman Acres copped a knock to his already strapped-up right knee and went off the ground to have it looked at.
Brashaw and Acres were the Dockers’ two leading ball-winners in the first half and shrugged off their respective scares to continue playing.
Magpies backman Brayden Maynard tweaked his groin while tackling Munday in the first quarter but also didn’t sub out.

MUNDY’S MOMENT
It wasn’t Fremantle’s night, but David Mundy gave Dockers fans one brief moment to savour.
Playing his farewell 376th match – moving him past Carlton legend Craig Bradley into eighth-place all time in VFL/AFL history – Mundy booted a late consolation goal for the vanquished.
Will Brodie read Cox’s centre-square hit-out, extracted the ball out of the middle and handed off to 37-year-old Mundy, who goaled on the run for his 161st and last goal.