Quade Cooper is open to the prospect of finishing his career with a season in the NRL, revealing he came within a whisper of signing with Parramatta a decade ago.

Cooper, currently recovering from an Achilles injury, hopes to be back on the rugby field as soon as March. The 34-year-old is an avid league fan and has fielded several NRL approaches over the years. However, the Wallabies playmaker has stayed the course in the 15-man game, compiling a career at the top level in Australia, France and now Japan.

His immediate focus is on making a full recovery and staking a claim for a spot in next year’s Rugby World Cup, but Cooper hasn’t ruled out the prospect of a swansong in league.

Back in 2011, the Eels identified Cooper as a marquee target who could turn the club around. Cooper was on the cusp of signing, only for a late phone call to change everything.

“I was 99 per cent going to sign,” he said. “It was a last-minute phone call from the Australian Rugby Union, they got wind of it. I feel if they didn’t get wind of it, I probably would have gone. 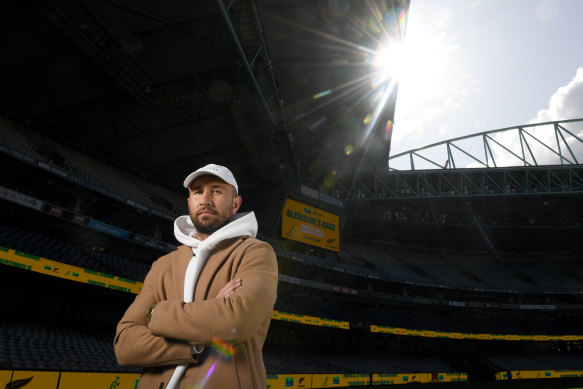 Quade Cooper is still interested in playing in the NRL, having nearly signed for Parramatta back in 2011.Credit:Getty

“It was literally moments before I was going to sign, I ended up staying in Queensland and we ended up winning the championship the following year. Those are pivotal moments in your life and career. As I said, I’m content with the choices that I made.

“I do still have a soft spot, I don’t know if I will get an opportunity to play rugby league, especially not at NRL level. At the end of the day I will probably end up going and playing at some stage, even if it’s local footy. I was going to have a game with my brother’s team last year, he plays for up in Brisbane.

“I was on holiday and was going to ask permission from my club to go and play with my little brother. And then I ended up getting a call from Dave [Rennie] to play for the Wallabies. Again, it was an interesting moment in time when I’m about to go to league and then I get a call.

“I had coffee with Dave and the rest is history, I’m back with the Wallabies after five or six years.”

Cooper has no regrets about the decision, which has allowed him to travel the world while playing rugby at the highest levels. However, he feels he would have a better chance of a successful switch now than earlier in his career.

“The funny thing is I put a question box on my Instagram [during the week],” he said. “Literally, one of the most asked questions is always about rugby league. Zac [Lomax] even said to me in the car over here [to a promotion for the Sonny Bill Williams-Mark Hunt fight] ‘Surely you could come back and play rugby league for one year?’

“I had a laugh. Physically, I know I’ll be able to do it. Mentally, I know I’d be able to do it now. If I went over and did it when I was young, I feel it would be a mixed bag of results. I had the skill set and everything to do it, but would I have had the time to learn the game the way I should have?

“Also, how I was living was very off-the-cuff. Whereas now I know I could physically do it and mentally I would put the effort into learning the game and understanding how it works.

“I understand the fundamentals of both games. At my age, it’s a huge risk for anybody who is going to take me on to play, but it’s something that I always wanted to do.

“I still love watching it. It’s a funny question, every time I think about it because I had a few opportunities to do it but chose to stay in union. I’ve always had a soft spot for league.”

Watch all the action from the Wallabies’ Spring Tour with every match streaming ad-free, live and on demand on Stan Sport. Continues this weekend (all times AEDT) with Scotland v Fiji and Italy v Samoa (both Saturday 11.50pm), Wales v All Blacks (Sunday 2am), Ireland v South Africa (Sunday 4.20am), France v Wallabies (Sunday 6.40am) and England v Argentina (Monday 1.05am).