Wallabies playmaker Bernard Foley is adamant he wasn’t deliberately wasting time in the dying moments of the most controversial Bledisloe Cup match in recent memory and says he couldn’t hear referee Mathieu Raynal properly due to the loud crowd in Melbourne.

Foley also said he was disappointed by comments made by All Blacks coach Ian Foster after Australia’s 39-37 defeat, believing that a “no comment” would have sufficed, given the Wallabies No.10 felt the All Blacks “got away with one” in a game that was Australia’s for the taking.

Rarely has a rugby Test ended in such dramatic circumstances, but that’s what unfolded on Thursday night in Melbourne as the All Blacks secured a two-point win after full-time following a refereeing decision that will be debated for years to come.

Australia had the ball and led 37-34 with a minute remaining when Foley was ruled to have taken too long to kick a ball into touch after the Wallabies had won a penalty.

Foley knew he had been told to get on with play but was under the impression time had been called off. Shortly before the ball would have connected with Foley’s boot, Raynal made a call that turned the match on its head.

The All Blacks scored moments later in the corner to win in dramatic circumstances, prompting outrage from Wallabies fans at the stadium and watching on television. 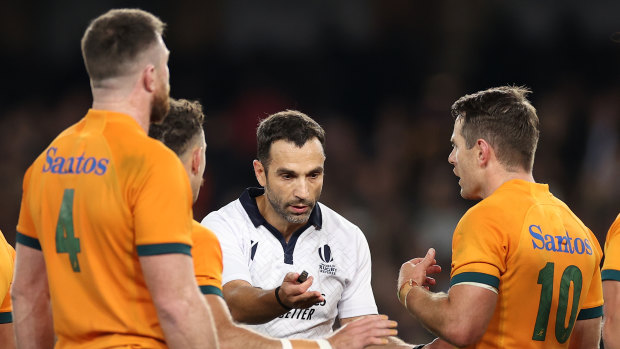 Speaking on Friday morning to the Herald and The Age, Foley explained what occurred from his perspective.

“There was a lot of confusion throughout the game,” Foley said. “I wasn’t trying to slow it down, but I was just trying to get really clear and concise about what we were trying to do at that next lineout.

“At the end it was very loud in the stadium, but there was no sense there was going to be a call like that.”

Replays showed Foley’s teammate Lalakai Foketi, who had just won a crucial turnover penalty, yelling at his No.10 to kick the ball.

“I think Lalakai maybe got a reaction from the ref,” Foley said. “In my dealings with [Raynal], he asked [me] to hurry up but had turned the clock off. He never told me he turned it back on or there would be other repercussions.

“It was pretty loud in the stadium there with 55,000 people. [I am still] trying to digest the whole situation.”

While Tim Horan, Morgan Turinui and a handful of other Wallabies players labelled the call the worst they had ever seen, Wallabies boss Dave Rennie took a more measured approach, but was certainly not happy.

Rennie will seek an explanation from World Rugby.

However, his counterpart, Foster, rubbed it in by declaring he had no issue with the call and effectively blamed Foley.

“I thought it was very clear cut,” Foster said. “He warned him. Part of your game management is to listen to the referee.”

Asked about Foster’s comments, Foley said he was surprised.

“I did see [his] comment,” Foley said. “If you get away with one, you probably would have a no comment. But for him to speak about it in that regard was a bit disappointing.” 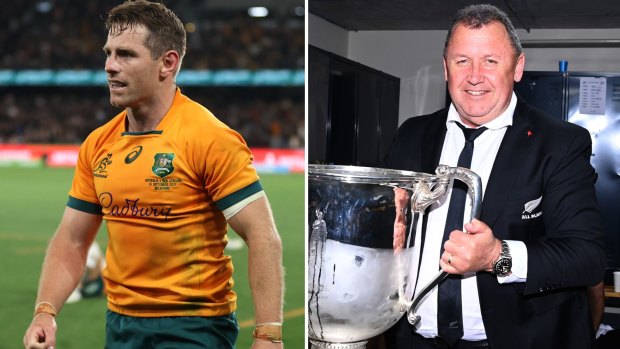 Rugby Australia chairman Hamish McLennan was asked about the incident on Friday morning.

“We teach our kids to be gracious in success and defeat, but that one was tough to take,” McLennan said. “Dave and the team did us proud.”

The Wallabies’ tremendous comeback – from 31-13 down – has been largely overlooked because of the controversy at the end of the match.

Even Nic White’s 48-metre penalty with three minutes to go, which could have been a memorable Bledisloe moment, was overshadowed by Raynal’s call.

“It’s funny, I roomed with Nic this week. He stepped up there, wanted that kick and absolutely nailed it. Even after the last couple of weeks he’s had, to show the resilience to step up in that big moment is a sign of what he does for this team.

“For the lads to stay in the fight and come back from that deficit, and a couple of men in the bin … to have a chance to win it at the end was pretty incredible.”

Although the incident left a sour taste in Foley’s mouth, it has only made him hungrier for Test appearances after a three-year hiatus from the international game.

Australia might not be able to regain the Bledisloe Cup this year but will be mighty determined to strike a blow at Eden Park next Saturday in the second and final Test between the sides.

“There’s still a lot to play for,” Foley said. “It’s a bit disappointing and bittersweet that we’re not playing for trophies and championships. To go over there and win at Eden Park is a massive carrot for us as a team.

“It’s also a chance to build on what we laid down yesterday. The guys will recover, take a few days to get the bodies right and then we’ll rip into the preparation.”

Watch every match of The Rugby Championship on the Home of Rugby, Stan Sport.