Suliasi Vunivalu says he’d always intended to quit the NRL and play at a Rugby World Cup and, after “struggling” with hamstring injuries since returning to the 15-man game, is now primed to step up and play Test rugby if selected against England.

Vunivalu expressed confidence about his readiness for Wallabies duty after it was confirmed the former Storm flyer had extended his contract with Rugby Australia and the Reds through to the end of 2023.

A major target of Wayne Bennett and the new Dolphins franchise, Vunivalu confirmed he’d been approached by NRL clubs but having played only 15 games in two years at the Reds due to two hamstring surgeries, he was motivated to stay in rugby and prove himself.

“There was talks about me going back to the NRL. But I wanted to stay,” Vunivalu said.

“I haven’t really done anything in union since my debut season was a bit of a write-off for myself. I just want to prove myself back here and try to make my goal of going to a World Cup and playing for the Wallabies.” 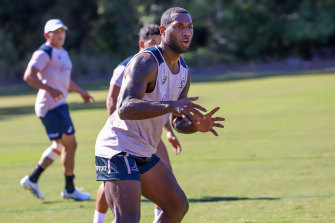 Suliasi Vunivalu training with the Wallabies on the Sunshine Coast.Credit:Rugby Australia/Andrew Phan

The 26-year-old said playing at a Rugby World Cup had been a goal since he was a youngster as he’d grown up in Fiji watching Super Rugby. Vunivalu later went to New Zealand for school, where he became hot property as a rugby player and was ultimately recruited by the Melbourne Storm.

Even when playing in the NRL, however, Vunivalu admitted he always had a goal about returning to the 15-game.

“I didn’t know I was going to end up in rugby league, leaving school,” Vunivalu said.

“But then when I was there I was with Nelson (Asofa-Solomona), we always spoke about spending a couple of years in league and then trying to head back to rugby when we were age 24 or 25. It happened for me.” 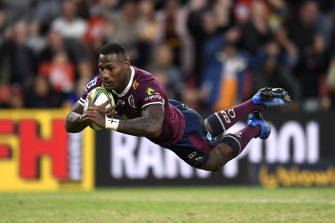 Vunivalu admitted he’d struggled when he suffered back-to-back hamstring injuries in 2021 that both required surgery, and not only scuttled his dream of making the Wallabies, but saw him miss eight rounds of the 2022 season as well.

“Last year was a goal to play really good footy and make the Wallabies, but that cut short and when I did my second hamstring I’ve gone back to my shell and struggled,” he said.

“This year it’s different, all the staff have been helping me throughout and that shows this season. I played six or seven games straight without feeling any tightness or anything.”

Vunivalu played the last seven games of the Reds’ season, and after attending two Wallabies camps in 2020 and 2021 to train, the speedster is at his first Wallabies camp as a contender for selection.

Coach Dave Rennie has confidence that Vunivalu is ready for Test rugby and the winger strongly agrees.

“One hundred percent. I will back myself. If he has that belief in me and wants to throw me in there and pick me, I will put my hand up and back myself to play,” Vunivalu said.

Fellow Storm alumnus Marika Koroibete has been Vunivalu’s go-to man for advice but James O’Connor has also been a valuable mentor, he said.