Justin Matamua swore to himself he wouldn’t cry.

“As soon as I saw my father, who has done everything for me my whole life, and the sacrifices he made to put me where I am today, I couldn’t help myself but to cry,” Matamua said. “I was very overwhelmed.”

Overwhelmed because the 19-year-old had just been on the phone with Wests Tigers coach Brett Kimmorley. The Campbelltown junior thought he was ringing with a reminder to be on time for training.

“A few seconds later, he broke the news I’d be making my debut on Saturday,” Matamua said.

The teen back-rower who makes his NRL debut off the bench against the Parramatta Eels at Leichhardt Oval on Saturday night is a textbook pathways story, one the Tigers are desperate to create more of.

A club that has so often struggled to find an identity could harness one in its next generation. Tigers director of football Tim Sheens has encouraged Kimmorley to fast-track the club’s emerging talent. 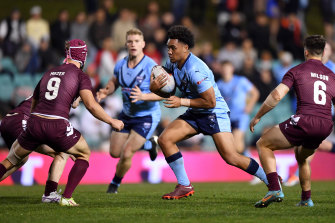 A week after Fonua Pole and Austin Dias made their NRL debuts, Kimmorley turns to a NSW under-19s representative who has played just four NSW Cup games, who not so long ago was captain of the Wests Magpies’ SG Ball team.

Matamua is not due to join the Tigers’ top 30 until 2024. Only next year will he be upgraded to an NRL development deal. Sheens sees him as something of a pin-up boy for the club’s development pathway.

The Tigers hierarchy see shades of their 2005 NRL premiership-winning team in the crop of youngsters now rising through the ranks. Sheens has emerged as a coaching candidate for 2023 and beyond, seen by some at Concord as the best person to develop those young players into genuine first-graders.

Those within the Tigers’ forward pack are already convinced Matamua has what it takes. Just ask Joe Ofahengaue, a man Matamua labels one of his childhood heroes.

“Young Justin is coming for my spot and that puts pressure on me,” Ofahengaue said.

“That’s what you want in a group. I’ve been a part of a team that did that for each other. When I was at [Brisbane Broncos], we went all the way to a grand final because of that. We were all competing.

“Our Cup team during training sessions, it was like we were playing a full game against each other. We just wanted each other’s spots. It’ll test your character.

“He’s a really good kid, a skilful footy player. All the boys in the middle are going to do their best to look after him.”

That won’t be lost on a kid who is as Tigers as they come, given Westfields Sports High School product Matamua grew up idolising Ofahengaue alongside the usual suspects like Sonny Bill Williams, Cameron Smith and Billy Slater.

“I grew up in the Campbelltown area so I’ve always been a Tigers fan. I’m very excited to finally put the jersey on and call myself a Wests Tiger.”