Ricky Stuart, fresh from being inducted into the NSW Rugby League Hall of Fame, says Jack Wighton has been “rejuvenated” after sitting in the Canberra coach’s box while he was suspended and backs his five-eighth to handle any position for the NSW.

Wighton served a two-match ban for a dangerous throw on New Zealand Warriors star fullback Reece Walsh, and Stuart said his own pin-up had learned a lot from the short time out.

It also allowed him to return fresh, something Blues coach Brad Fittler commented on a day earlier after promoting him to left centre for Origin I ahead of Stephen Crichton.

“I think Jack sitting in the box and having two weeks off watching the game from afar has given him some rejuvenation,” Stuart told the Herald.

“He came up in the box and I think he got a completely different feel for the game.

“I think he came up thinking he was going to lighten my mood. He thought I was in the box bagging the f..k out of every player. 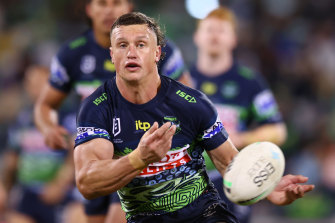 Jack Wighton will start at left centre for NSW.Credit:Getty

“But 90 per cent of the time I’m calling the game and rapping my players, things like ‘great hit’, ‘great kick’, ‘good support’ … I’m very complimentary.

“I love being on the sideline, but the only reason I haven’t been of late is because I can’t handle 80 minutes of having a [camera] tripod in my face. It gets irritating.

“I like being on the sideline because I feel what they’re going through.

“When I’m in the box, 90 per cent of the time it’s positive commentary. And I think Jack has seen the game differently.” 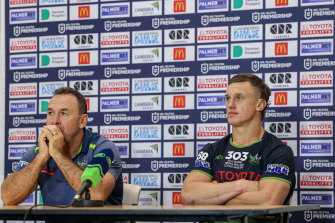 Stuart and Wighton after the round nine match which led to the latter’s stint on the sidelines.Credit:Erick Lucero/NRL Photos

Stuart said he was unaware of Fittler’s plans to start Wighton ahead of Crichton at left centre, but hailed the move.

He said Wighton was a changed man this season, and it was only natural to be frustrated given the excessive changes to players in key positions around him because of injuries at the Raiders last year.

Since Charnze Nicoll-Klokstad injured his neck against premiers Penrith 12 months ago, Wighton has had half-a-dozen different halves partners, while the fullback and hooker positions have also been on high rotation.

“I’ve seen a change in Jack this season, I really have,” Stuart said.

“I’d be cranky, too, with the bad luck we have had [with injuries]. No other five-eighth has had to endure so much change the last 20 or so games. I love how he wants to throw the players on his back and take them forward.

“You could play Jack at lock if you wanted to. You just put him in the 13.”

Stuart was unsure what Wighton’s best position is, be it fullback or five-eighth, and only moved him to the latter out of necessity, something the homegrown hero never complained about.

The premiership-winning player and coach was one of three inducted into the NSWRL Hall of Fame on Monday night, along with St George legend Ken Kearney and Harry Wells, who won a grand final with South Sydney on the wing, but was better known as a Western Suburbs Magpies favourite.

Stuart was honoured to join inductees Tommy Raudonikis and Bob Fulton, two players he idolised growing up, especially Fulton who said to Stuart when he first met him one night in Melbourne: “How about your head?”

The Raiders coach forged a close bond with Fulton, as he did with all his coaches, while he recalled his favourite Origin moment being Michael O’Connor’s sideline conversion in the pouring rain in Sydney in 1991.