As Essendon prepare for their 150th anniversary celebration on Friday night against Carlton, you can’t help but think how the mighty have fallen.

The Bombers, along with the Blues, were our biggest Victorian rivals of the ’90s. 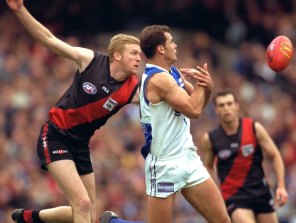 Between us, Essendon and North Melbourne won five flags in just eight years, from the Baby Bombers of ’93 to their all-conquering team of 2000.

Under David Parkin, the Blues denied us in a preliminary final in 1995 before we bounced back in 1996 and beat them in the grand final of ’99.

The suburban rivalry was real because in many cases we were literally neighbours – at one stage, I even lived over the road from Matthew Lloyd in Moonee Ponds. But our rivalry with Essendon also had many other layers.

Denis Pagan coached the reserves under Kevin Sheedy at Windy Hill before coming back to North Melbourne. We were taught to dislike them. He’d always remind us how the Bombers thought they were better than us in every walk of life. It meant there was always an edge whenever we met.

While we never faced off in a grand final, we should have if not for the Bombers losing preliminary finals by a point in both ’96 and ’99. Still, there were plenty of memorable moments.

In 1998 there was the “marshmallow game”, after Kevin Sheedy took aim at Kangaroos executives Mark Dawson, the “pink marshmallow”, and Greg Miller, the white one.

The Bombers famously lost the 1999 preliminary final to Carlton by a point.Credit:Pat Scala

Back then we were always confident and beat them pretty comfortably on the way to the grand final.

But I’ve heard Lloyd and others say that was a bit of a “line in the sand” game for them; no longer would they ever accept being pushed around.

We lost to them twice the following year – including the “shootout” I had with Lloydy – and twice again in 2000 when they flogged us by 125 points in the qualifying final. While we had once bullied them, now they were bullying us.

That Essendon team built its reputation on intimidation and an uncompromising attack on the footy. They had a belief in what they did and always backed one another up. We still thought we could beat them if we were at our best, but in reality that team of 2000 was as good as unbeatable. Against most teams their presence gave them an advantage even before they walked onto the field.

But times have changed.

Like the Roos, the Bombers are struggling. To rub it in a bit more, the Blues are finally waking from their slumber after decades in the footy wilderness.

While I certainly think there’s value in drawing on the past, I would only do it selectively. 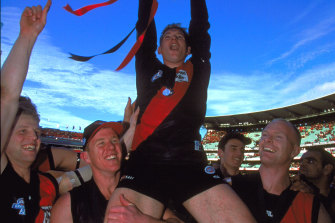 That’s why it baffled me to read this week that Kevin Sheedy hadn’t spoken of his many premiership triumphs but the supplements saga.

I’m sure scars remain at that footy club, but for the majority of the group that was a different time. What value did Sheeds think there was in demanding an apology from the AFL? Was it a classic Sheedy diversion? Or just bitterness? An apology is not going to make this group kick any more goals.

If Essendon are to look in the rearview mirror, it should only be to remember exactly what has made this club great. Times have changed, but certain ideals remain constant. It’s a clear understanding of what you stand for collectively and as individuals. It’s being able to identify, articulate and execute a plan that serves the common cause.

There can be no confusion about that plan. Then it’s easier to have consequences for those who step outside team boundaries. Some players won’t be strong enough and some won’t be good enough. How that is identified is down to leadership both in coaching and in what happens on-field.

I felt sorry for Dyson Heppell watching the vision of Darcy Parish walking away from him during that argument against Port Adelaide.

Heppell was a little helpless. Grab Parish and it’s a bigger story. Let him go and it reflects poorly on his authority.

It’s important to be able to challenge one another and disagreements happen even in the best environments – as we’ve witnessed at Melbourne this week – but they must be dealt with more respectfully and professionally than that.

Could you imagine Parish acting that way to Terry Daniher, “Bomber” Thompson or James Hird? I don’t think so.

Still, I’m a great believer that what doesn’t break you makes you stronger. The supplements saga is done. The club’s recent struggles can’t be changed. The Bombers have the chance – starting Friday night – to shape the standards of this great club for the now and the next 150 years.