The first thing Bill Knowles had to impress upon Latrell Mitchell, much as he did when Tiger Woods, Alex Rodriguez, Andy Murray, Peyton Manning, Jonny Wilkinson and countless others arrived on his doorstep to be healed, was that it wasn’t about the injury.

In Mitchell’s case, the reason he made the 16,000km pilgrimage to see Knowles – a “reconditioning specialist” to the world’s biggest sporting stars – was to fix his hamstrings. So you would think that, over the course of the two weeks they spent together in Philadelphia, Knowles was fixated on those gammy hammys. You’d be wrong.

“The reality is what we saw is an athlete that is incredibly powerful, incredibly gifted,” Knowles told the Herald.

“If you just let the individual be athletic and express themselves – I don’t want to say childishly – but forget about Latrell the star rugby player, just be Latrell the athlete and the kid who can change direction and jump and throw things and catch things and move around.

“It could be through lots of different games. With that, what I saw over two weeks, the phrase I use is ‘We pull the athlete out of their injury’.

“It’s very often that athletes get caught up in that they have had this injury, the focus is on the injury, the attention, the scans, the rehab protocol – everything is about the injury.

“I have a tendency to forget about the injury and focus on the movements and think of an athlete as a whole.

“What I saw over the two weeks is an athlete who was wondering ‘am I still an athlete?’

“And then switching very quickly to say, ‘Yes, I am. I’m still an athlete, I’ve got this.’”

Only two points separated South Sydney and Penrith on grand final day last year. Getting there without Mitchell, whose hamstring pinged five weeks earlier, remains one of Wayne Bennett’s finer achievements. Could Mitchell have been the difference if he was fit?

It’s not a question the Rabbitohs want to ask themselves again. Which is why, when the star fullback tore the tendon in his hamstring against the Dragons in round five, the club knew it needed to address the underlying issues that kept sidelining its most precious asset.

That’s where Knowles comes in. Speaking just before flying out to France to give a lecture, the performance guru spoke about the holistic approach he took to addressing the hamstring issue, to the point he calls it a “lower extremity” or “movement disorder”. 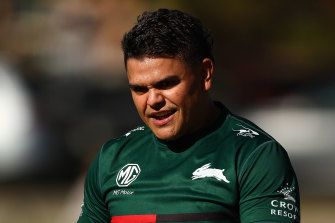 “In this case we look at it that the hamstring is not a solo, it’s in a symphony.

“What I’m saying is you pull their athlete out of their injury. If you focus on the solo player, you forget about the quality of the whole symphony.

“I make sure everyone is playing at the right time, the orchestra is going really well. When that happens, the hamstring is less loaded, it’s more part of the process and it decreases their risk [of reinjury].”

A cursory glance at Mitchell’s trip, which was documented on his Instagram account, shows how the aim was achieved. Knowles put the premiership-winning playmaker through a series of games, drills and exercises to study his movement patterns and detect any areas of concern.

Sometimes it would be in the form of Mitchell fielding ground balls with his left and then right hand, as if he was an outfielder in cricket. At other times he would be spinning two hula hoops on the end of a bar while balancing one-legged on a Bosu ball.

Every movement had to be done correctly with a view to “enhancing acceleration, deceleration and change of direction, because that’s his game.”

“The phrase that I use when I look at him is ‘his strength is on the inside’,” Knowles said.

“It’s not on the outside. We’ve worked with some very big, strong, powerful NFL players, some England rugby players, even some AFL players.

“There are certain athletes where you look at them and just see how cut up they are, how their muscles are. It doesn’t mean they are not powerful in their sport, but a lot of it is shaped in the gym and it’s different.

“He’s a big guy, but what I see is the strength comes from within. The expression comes out of him. It’s different, it’s sleepy, you don’t see it but he puts on a big hit and can go through people.

“I’ve worked with other athletes a lot that are very elite level, world-class, and they have many similar characteristics. Latrell is one of those top, top people, he just happens to play rugby.

“If his body was in football or in ice hockey, he would be expressing the same qualities.”

“Total professional,” Knowles said. “Always on time, full pelt, full gas. He was a student of the process, absolutely taking on board what we were doing and why we were doing it.

“You see something that is very special there. When he starts to accelerate, when he opens up and runs a bit faster and starts to change direction and certain other things we did in our training, you can tell he has something special.”

Mitchell’s trip to the United States was a sizable investment from the “Pride of the League”. The cost to send him, Rabbitohs assistant physiotherapist Luke Annesley and digital content manager Sunny Brar is estimated to have come to about $70,000. It’s a small price to pay if the superstar’s time on the sidelines comes to an end.

So is Mitchell cured?

“I’m just going into the left side of my desk, into my drawer so I can pull out a crystal ball,” Knowles quipped.

“I’m thinking of the many athletes I’ve worked with and I go back to [former Sydney and Geelong AFL player] Danny Menzel. Four ACLs by the time he was 21, he was just so screwed. And then he went on to play six more years as a pro.

“You never know and you can’t predict these things, but he is in a very good place to understand what the process is to come back from this injury.”

Watch the State of Origin exclusively live and free on Channel 9 and 9Now.