Hawthorn will play Sydney in Launceston on Anzac Day, with the club also securing an away match in Hobart against North Melbourne in addition to their four home games in Tasmania in 2022.

It will be the second successive season the Hawks have played on Anzac Day after their thriller against Adelaide in Launceston last year, while it will be the first time they have met the Kangaroos in Hobart. The two clubs will each play four home games in the Apple Isle in 2022. 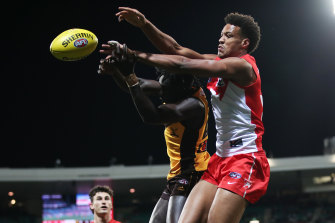 The Hawks and the Swans will clash in Tasmania on Anzac Day.Credit:AFL Photos

The decision means the Hawks will not travel to Sydney in round two, which many expected as their former star Lance Franklin closes in on the 1000-goal milestone. The Hawks will play their traditional Easter Monday clash against Geelong in round five.

On Wednesday, North Melbourne confirmed they will play the Western Bulldogs on Good Friday,

while they will again play Geelong in Hobart with this year’s fixture in round six. They will play Gold Coast in Darwin in round 12.

The full fixture is expected to be released on Thursday, with round one already known to start on Wednesday night with five matches between 10 Victorian teams a key part of the season opener.