Hawthorn have requested a home game in Launceston over the Anzac Day weekend and also want a major Victorian side as their opponent for their annual emergency services clash, as they begin a new era under coach Sam Mitchell.

The Hawks conjured a stunning come-from-behind win over the Adelaide Crows in Launceston this year on Anzac Day, one of three matches played on the actual day. 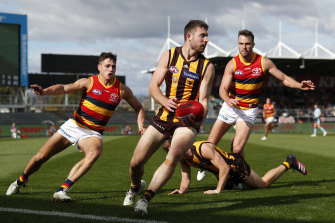 The Hawks and Crows played an Anzac Day clash in Launceston this year.Credit:Getty Images

The Crows are an option to return next season but, ideally, the Hawks would have a popular Victorian-based team as an opponent. Anzac Day next year falls on a Monday.

The Hawks have had their contract with the Tasmanian government extended by a year, as club presidents begin to weigh up whether to accept the state’s bid for a 19th AFL licence. That vote will be held midway through 2022.

Ahead of the men’s fixture release, which the AFL envisions to be later this month, the Hawks say they are also keen to build on their match honouring emergency services workers. They have hosted Collingwood in the three years since the fundraiser for the Emergency Services Foundation was founded.

This year’s round 21 match was held before an empty stadium at the MCG during Melbourne’s sixth lockdown. At one point, it was shifted to Launceston, meaning the Magpies would have featured for the first time in a home-and-away match in Tasmania, but that plan was scuppered when a new COVID-19 case in the Apple Isle forced the sold-out clash to return to the MCG.

The Hawks have requested a major Melbourne-based opponent for that game, helping to attract a healthy attendance in a year when they are not expected to be serious finals contenders.

The Magpies remain the ideal opponents despite the Pies facing the first year of a rebuild under new coach Craig McRae. But their drawing power, regardless of the state of their list and pre-season expectations, remains high, and they are at the top of a wish list that features several clubs.

The Brisbane Lions have requested their Easter Thursday clash against the Magpies return to the Gabba, the Magpies and Essendon continue to have the blockbuster Anzac Day clash at the MCG, while Carlton and the Magpies are keen to meet twice a year.

The league has also yet to unveil the AFLW fixture, which has complications because Western Australia’s border will not open to all states for several months.

The season, already delayed, is slated to start between January 6-9, meaning Fremantle and West Coast may be forced on the road in the early stages of the season. WA’s border is currently open to Queensland and South Australia, so another option is for the Eagles and Dockers to play the three teams spread across those two states and have a Perth derby to at least get their season going.

That the WA border is expected to open in late January means – at this point – the men’s Dockers and Eagles can host early season matches and quarantine will not be needed for visiting teams.