Melbourne coach Simon Goodwin has lashed out at a series of ill-disciplined acts that cost the Demons three goals and weighed heavily in their qualifying final defeat at the hands of Sydney. 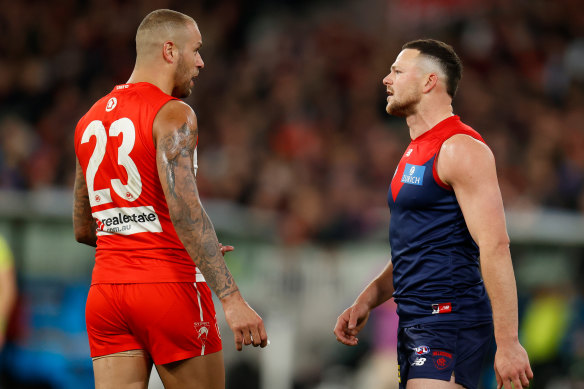 There was plenty of heat between Buddy Franklin and Steven May.Credit:Getty Images

“Finals footy is about getting the basics right for a long period of time and you need to be a disciplined footy team all the time,” Goodwin said.

“If you give away 50-metre goals or downfield free kicks or give up territory through downfield reversals, and it costs you goals, that hurts.

“In tight games, where the stakes are high, that hurts. You’ve got to get the basics of your game right, and discipline’s one of those.”

May’s indiscretion was his only blemish in a command performance against Swans superstar Lance Franklin. Harmes will come under the scrutiny of the match review officer after his late, front-on hit on Jake Lloyd.

“From what I’ve seen, he gets him in the chest, he played on with no concussion,” Goodwin said. “It’s one of those collisions that happens in footy. It was a little bit late, but he got him in the chest.”

Goodwin also rued a first-quarter injury to gun midfielder Christian Petracca, sustained when smothering Franklin, that limited his output for the rest of the game.

“He got a pretty significant kick from Buddy just below the knee in the calf,” Goodwin said. “He’s got a contusion that we’ll assess during the week, but he’s pretty sore. Clearly, it limited his movement for the majority of the night and had a bit of an impact on his game. He’ll get that reset and hopefully be ready to go next week.”

This was Melbourne’s third defeat in a row at the hands of Sydney. Goodwin put their upper hand down to efficiency.

“They’ve just been a little bit more efficient,” he said. “They’ve converted incredibly well. Full credit to them. They play a great brand of footy, they play a contested style and they’re efficient. That’s our challenge.”

Goodwin sought to minimise the gravity of the defeat in terms of winning the premiership, saying the Demons’ task was the same as beforehand, and the same as every other team in the finals, to win three games in a row.

He said key forward Tom McDonald’s prospects of a recall would be assessed after a training session on Saturday morning.

Sydney coach John Longmire described his team’s victory – in which they had remained composed when Melbourne had momentum and the lead – as “a super win.”

“There were some big moments the boys stood up … they did a really good job – it was a super win. They stayed composed and went back to what we do.”

Longmire said the Swans had found other avenues to score on an evening when veteran star Lance Franklin was beaten by Steven May, whom the Swans coach called “a brilliant player.″⁣

Longmire said key midfielder Luke Parker had been important at crucial times when the Demons had the momentum. “He was pretty important, he was hard and clean,” he said.

Ollie Florent, who was limping late in the game, was fine. “He sprained his foot. It’s OK – I think he just stood in a hole out there, but he said it’s fine.”

Longmire did not buy into the notion that the Swans were ahead of schedule to be in a home preliminary final, given their younger age profile.

“I’m not sure you ever say what the time is,” he said. “You’ve got to take your moments, age profile or not.”