St Kilda will sweat over scans on captain Jack Steele’s shoulder, while Jack Higgins has another concussion battle to deal with, on a night the Saints snapped a six-year losing streak against Geelong.

The Saints turned a 16-point half-time deficit into a 10-point win at Marvel Stadium, snapping a two-game losing streak and improving their win-loss record to 6-3, ensuring they are firmly in the top-four hunt. The victory was also their first over the Cats since round 14, 2016. 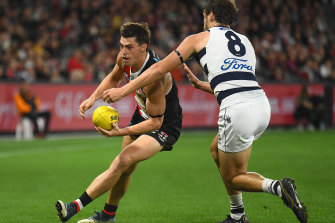 “The build up and losing two in a row, it was a pretty important game for us. Probably in the first half, I felt the game was on their terms. We had moments, but there was no real flair, we were pretty bland, then in the third quarter it happened,” Ratten said.

“We started to win contests, we started to run with the ball, we got active with the game, at both ends, back and forward.”

Steele showed tremendous resolve to play after he hurt his AC joint, while the Saints will monitor Higgins closely.

Ratten said the small forward was concussed by a spoil from Tom Stewart in the first term. He played on, then later withstood a hip and shoulder from Jake Kolodjashnij, and asked to be assessed. He then failed the concussion test. The second incident will be scrutinised by the match review officer.

“He copped a bit of a knock, but it took until the second quarter before he started to feel not great … he asked the docs, and the docs did the scan, and he failed that,” Ratten said.

“It was a normal standard concussion – just a knock.”

This was the second time in five weeks that Higgins was concussed. He had also been hurt against Richmond last month. He will miss next week’s trip to Adelaide to face the Crows, but that’s a minor consideration considering Higgins’ history of two rounds of brain surgery in 2019.

The Saints trailed by 16 points at half-time, and 21 early in the third term, but a seven-goal-to-two third term turned the contest. The Cats fought desperately in the final term but Paddy Ryder, best on ground, booted two goals to ensure victory. Ryder’s father is visiting from Western Australia, and Ratten joked he should visit more often. 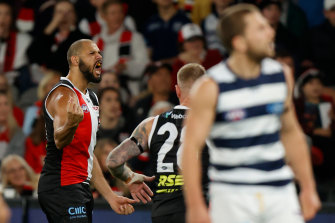 Paddy Ryder, left, was on song for the Saints. Credit:Getty Images

Brad Crouch was dynamic in the midfield, while Jade Gresham, Jack Sinclair and Seb Ross provided much drive. Callum Wilkie was resolute in defence, holding Jeremy Cameron to only one goal, late in the contest, while substitute Marcus Windhager was praised for his role.

Geelong coach Chris Scott was left to lament an inability to win the contested ball when the Saints took control in the third term.

The Cats have back-to-back wins only once this season, and lacked a spark when St Kilda surged.

“It was, obviously, where the game was won by them, they did take it away from us. We clearly didn’t play well in that period of the game. It is a shame because, for the most part, we probably had control of the game,” Scott said.

The Cats’ new attacking game plan remains a work in progress, but whether it ultimately propels them into true flag consideration remains debatable. Scott could not say if the Cats would be a top-four contender come the end of the season.

They will need to rebound against Port Adelaide at GMHBA Stadium on Saturday if they are to remain in touch with the top four.