Sources with knowledge of the situation told the Sydney Morning Herald that Morrison has approached a prominent rugby league figure to express an interest in becoming a director of the game. 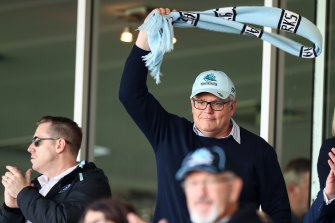 Scott Morrison at a Sharks game in 2020 at Netstrata Jubilee Stadium.Credit:NRL Photos

ARLC chairman Peter V’landys says he hasn’t been approached directly, despite hosting both Morrison and his successor as prime minister, Anthony Albanese, in the NRL suite for the opening game of the State of Origin series last month.

However Morrison, a Cronulla Sharks fan, has indicated that he wants to be involved in the running of the game in the future.

Morrison took his role as chairman of selectors for the Prime Minister’s XIII seriously when he helped Mal Meninga choose the side for the match against PNG in 2019. Morrison made a number of requests, including the selection of former Cronulla captain Paul Gallen.

Watch the State of Origin decider exclusively live and free on Channel 9 and 9Now.