The Adelaide Crows and Brisbane Lions, along with the wider AFLW community, will on Friday night honour inaugural Adelaide premiership player Heather Anderson, who tragically passed away earlier this week. 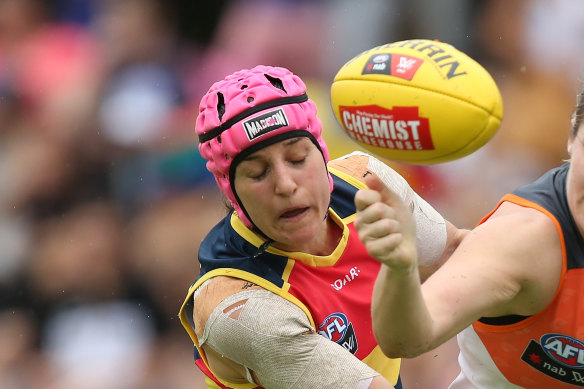 Crows defender Najwa Allen said there have been discussions throughout the week about Anderson and just who she was.

“Chelsea (Randall) had a good chat about her on Monday, just for us who didn’t know her, and she sort of acknowledged that she deserves to be spoken about and honoured [for] the person that she was,” said Allen.

“And then on Friday night we’ll be wearing an armband … and we’ll probably do a couple of other things just to touch on her and the person that she was.”

Anderson’s family have described the public reaction to her death as “comforting testament” to the impact she had on all those around her.

“Last Sunday we lost our Heather. Heather was a daughter, a sister, a grand-daughter, a niece and a cousin. The sadness and loss our family is experiencing is palpable,” the family said in a statement.

“The remarkable response to the news of Heather taking her own life has been a comforting testament to the love and friendships she shared with friends, former teammates, and fellow soldiers from across the whole country.

“We love and miss Heather. We are grateful for the wonderful life she lived and the limits we constantly watched her push.

“We treasure the memories of her and her achievements, and are in awe of the outpouring of support from across Australia.

“We’d like to thank AFLW, especially the Adelaide Crows, and defence (the defence department) for their support and acknowledge the support of the broader community.”

Both AFLW clubs will be wearing black armbands with the Lions honouring Courtney Hodder’s grandfather who also died recently.

There’ll also be a minute’s silence in the pre-game ceremony to remember Anderson.

Adelaide’s playing group will also wear pink shoelaces as a nod to Anderson’s pink helmet, which she wore to help her vision-impaired mother spot her on the field.

Anderson, 28, was a reliable defender who played in exhibition games before the AFLW started, but she had her professional career cut short after a second serious shoulder dislocation in the 2017 AFLW grand final.

She was also a medic in the Australian Defence Force.

“Doesn’t seem real that you’re gone. Selfless, courageous, hard working and one of the all time greats. A TRUE ultimate teammate and the kindest human you would ever meet,” Randall wrote.

“I feel so fortunate that footy brought our lives together. To call you a mate, and to have shared in so many special memories. I’ll miss you so much buddy. Our deepest condolences to Head’s family and friends. Rest In Peace Heads. Love you mate.”

Allen said that the club had been preparing for the game while also allowing players to grieve.

The preliminary final will determine who clashes in the grand final the following weekend, and which sides’ seasons will end.

“We’re just trying to prepare for it the same way that we would any game, and just allowing, obviously, people to feel what they feel and grieve how they’re going to grieve that loss,” said Allen.

“We’re really excited to have another crack at Brisbane and, and hopefully take it to them a little bit more than we did last time,” Allen said.

The two have forged a fierce rivalry, having met in two grand finals – Adelaide claiming the first in 2017, and Brisbane winning the other in 2021. Earlier this season, the Lions had the upper hand when they met, claiming a 22-point victory over the reigning premiers.

Allen said a focus of the game will be trying to contain Brisbane’s pressure, while playing a consistent four quarters of football.

“When we played them last time, we got off to a really good start and then we sort of let them back into the game in the second quarter, and they put about three or four goals past us.

“So, I think if we can just find a consistent point of footy throughout, we’ll be in really good stead against them.”