This time at least, Taylan May can’t be accused of assaulting someone from behind.

The earlier thinking seemed to be: fans deserve to see the best players in action in the finals. Why not just defer any potential ban to next year?

And if May ends up facing the NRL judiciary on Tuesday night for a high shot on Parramatta’s Will Penisini, which resulted in the Panthers winger spending 10 minutes in the sin bin, you know what argument he will make.

Lawyer Nick Ghabar can walk straight into League Central, look to his left at his client and say, “I rest my case”. The game’s most controversial winger this week doesn’t just have a precedent to follow, he is the precedent.

Days after the NRL’s head-scratching call to allow the 21-year-old to play in the finals and serve a two-match ban in 2023 after being found guilty of assaulting a teenage pub patron, who was allegedly harassing Nathan Cleary during last year’s premiership celebrations, May finally copped an immediate punishment. 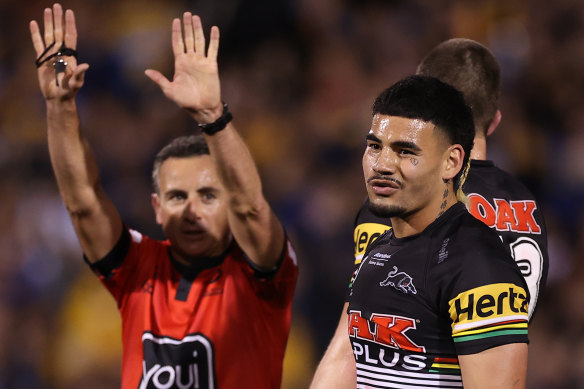 Taylan May is sent to the sin bin.Credit:Getty

Added to insult was injury. The Rookie of the Year contender left the field in the last 10 minutes due to a hamstring problem, trying to stretch for one of Nathan Cleary’s floating passes as Penrith coasted past their western Sydney rivals 27-8 at BlueBet Stadium on Friday night.

Earlier referee Gerard Sutton, on the advice of the NRL’s bunker, summoned May to the western side of BlueBet Stadium and told him to cool his heels for 10 minutes.

Belatedly, Penisini was chaperoned from the field for a head injury assessment. He passed, which is more than can be said for the NRL’s pub test earlier in the week.

It will almost certainly cost May more than the $1000 a Maroochydore magistrate decided was an appropriate punishment for his hotel antics, but at least it won’t come with the tag of being “reprehensible” and “cowardly”, as the magistrate in his case described his actions.

In May’s favour, he hasn’t been charged by the match review committee this year. So to finally miss a finals game, he’ll have to be slugged with a grade two careless high tackle at a minimum – which is possible when Luke Patten’s reviewers comb over the footage on Saturday morning.

They’ll be busy elsewhere too.

Eels forward Marata Niukore was placed on report for a cannonball tackle on Stephen Crichton, and Crichton’s Penrith teammate Spencer Leniu was booked for a high shot on Isaiah Papali’i, which temporarily gave the Eels a second-half lead when Mitchell Moses landed the penalty goal.

Penrith fans, whom the NRL didn’t want to punish, might have thought May playing was a punishment after all. On top of the sin bin, he was also creamed in a tackle by Reed Mahoney and Ryan Matterson, in which the ball popped free. The Eels scored from the next set through Oregon Kaufusi. It was the only time they crossed all night.

But where’s there’s a spill, there’s usually a May.

Only this time it wasn’t from behind.