Wests Tigers star Jackson Hastings is feared to have suffered a season-ending ankle injury in a hip-drop tackle that has seen Broncos forward linchpin Pat Carrigan referred directly to the judiciary.

Hastings is expecting scan results to be returned on Sunday afternoon but the club fears he sustained a syndesmosis injury in the Tigers’ win over the Broncos on Saturday. If the injury is confirmed, Hastings could miss the remaining five weeks in the Tigers season.

Carrigan too faces a nervous wait ahead of Tuesday’s judiciary hearing, with the panel able to take the severity of Hastings’ injury into account.

Given it is Carrigan’s first dangerous contact offence, under regular circumstances he would be facing a two-week suspension with an early guilty plea, or three weeks if he were to challenge the ban unsuccessfully.

However, the Match Review Committee’s direct referral allows the NRL to push for a potentially longer ban before the judiciary. 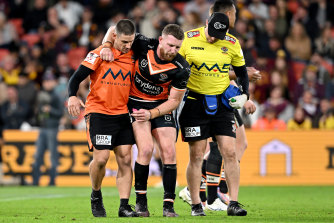 Jackson Hastings is helped off after Pat Carrigan’s illegal tackle.Credit:Getty

South Sydney prop Tom Burgess is also facing at least a week on the sidelines for the high shot on Ronaldo Mulitalo that saw him sent off in Cronulla’s last-gasp win on Saturday night.

Burgess was hit with a grade 2 careless high tackle charge and would risk a two-game suspension if he were to challenge the ban.