Australia’s upcoming spring tour has been compared to an England Six Nations campaign, just without the weeks off in between.

The Wallabies begin on Saturday (Sunday morning AEDT) with a battle against Scotland in Edinburgh before a clash with France the following weekend in Paris. Then it’s off to Florence to take on Italy, across to Dublin to play Ireland, before a fifth and final match against Wales on November 26 (November 27 AEDT) to round out the tour.

England are the only side Australia do not play. Had that game been on the calendar, it would have been the Wallabies’ first grand slam tour since 2016.

“It’s the tour and the matches you’d like coming up to a World Cup,” said former Wallabies captain George Gregan. “Because if you’re lucky enough to get to a final, you’re playing seven on the bounce. It gets you into [the mindset] of what it feels like to play five Test matches in a row. It’s a good rehearsal. The temptation is you can sometimes keep talking about the World Cup but there’s a lot to go in the here and now and even prior to that. It’s a really good hit-out against quality opposition.”

There’s good and bad news for Wallabies fans when it comes to the times of matches, which are all set to be broadcast on Stan Sport.

The Scotland (3.30am) and Wales (2.15am) fixtures are certainly at inconvenient times and only the most ardent rugby watchers will make the effort for those games. The Italy Test (midnight) may suit those who stay up late on Saturday evenings. 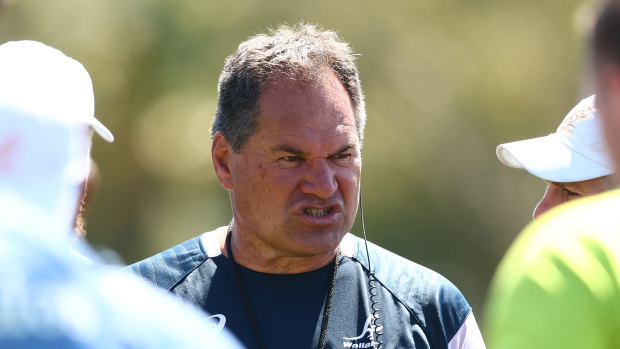 Coach Dave Rennie is under pressure to get the Wallabies firing. Credit:Getty

However, the two most anticipated games of the tour — against France and Ireland — will be beamed into Australian lounge rooms at 7am on Sunday for the east coast fans.

We’re not sure the Wallabies will love the 9pm kick-off in Paris, though.

Who is in Australia’s squad?

Dave Rennie initially picked 36 players in the touring party before Matt Philip did his ACL on the day the team departed Sydney.

He has been replaced by Darcy Swain, who has joined the squad in Saint-Etienne – the small French city where the team will be based during next year’s World Cup. 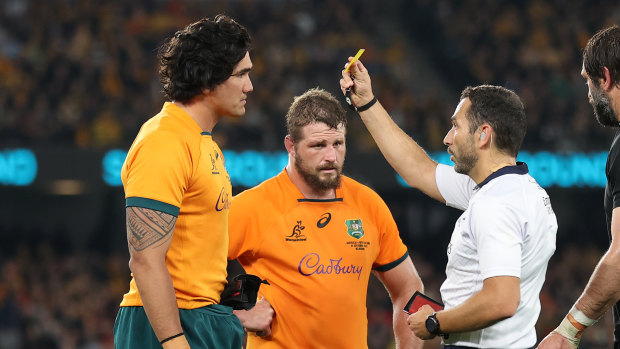 Darcy Swain is shown a yellow card for a dangerous tackle on Quinn Tupaea in Bledisloe I.Credit:Getty

Other notable names include No.10 Bernard Foley and second-rower Will Skelton, as the team’s two overseas-based players.

Tom Banks is back from a broken arm, while Michael Hooper is poised to play his first Test since the final match of the England series in July.

Who’s not on the tour?

The Wallabies have been decimated by injuries this year.

Samu Kerevi and Quade Cooper won’t be back until next year.

Forwards Rob Leota, Angus Bell and Izack Rodda join Philip on the casualty ward over the off-season. Izaia Perese, who made his debut on last year’s spring tour, is gone until next season.

Then there’s a handful of Japanese-based players in Marika Koroibete and Rory Arnold who are back with their franchises and won’t come into Wallabies reckoning until next year.

James O’Connor is also injured but on the outer at the selection table. 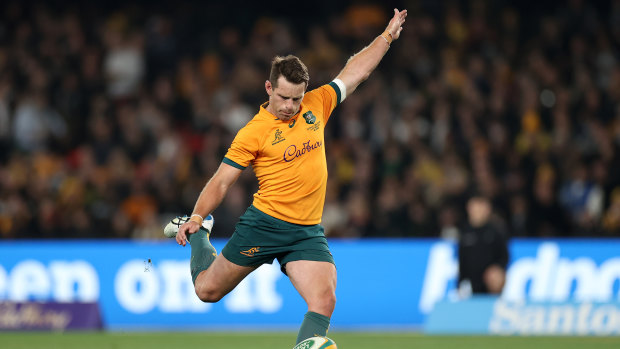 Bernard Foley kicks for goal in the Bledisloe Cup opener in Melbourne.Credit:Getty

Will some players be unavailable during the tour?

Yes. Foley has said he won’t play the final match against Wales. The first Scotland match is outside the international window, which means Skelton doesn’t link up with the group until the France week. He’ll also miss the Wales match. Swain is suspended for the first two Tests but can return for Italy.

How have Australia’s opponents been going?

Scotland haven’t played since a 2-1 series defeat to Michael Cheika’s Argentina side in July.

France won the Six Nations this year and are ranked No.2 in the world. They are rated by many as the favourites for a home World Cup next year. 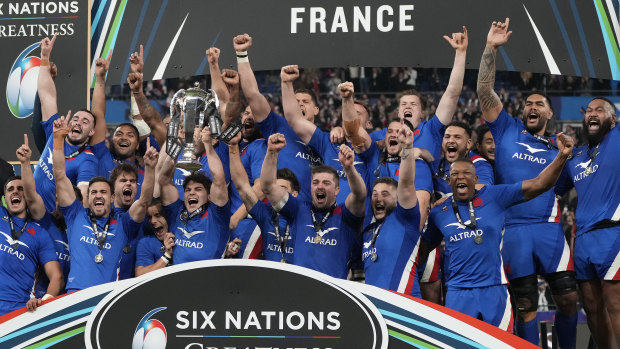 Italy, who traditionally struggle against Tier 1 teams, knocked off Wales by a point in the Six Nations earlier this year before another four straight victories, albeit against weaker opponents (Netherlands, Namibia, Portugal and Romania).

Ireland are relishing their world No.1 ranking after a famous series win over the All Blacks in New Zealand, while Wales fell 2-1 to the Springboks in their recent series in South Africa.

How have Australia fared against their opponents of late?

The Wallabies won 15 consecutive Tests against Scotland from 1982 to 2006 but have now lost five of their last eight against them, including three on the trot since 2017.

Australia beat France 2-1 last year at home, but it was effectively against a second-string side.

The Wallabies have not lost to Italy from 18 Tests since 1983 – it would be a complete disaster if they did – while Ireland have bragging rights after their 2-1 series win in 2018 on Australian soil.

Much like Scotland, Australia used to dominate Wales. From 2009 to 2017, the men in gold won 13 straight Tests against Wales but have stumbled on the last three occasions, all by four points or less.

Remind me how recent spring tours have gone?

Not great. After not touring Europe in 2020, due to COVID-19, the Wallabies lost all three matches in 2021 against Scotland, England and Wales.

You have to go back to 2013 to find a successful tour, when Australia came away victorious in four of five Tests after narrowly going down to England 20-13 to begin the trip.

Rugby Australia chief executive Andy Marinos has said he wants to win more matches than not on the trip, meaning three would be a pass mark. Four of the five sides – every team except Italy – are above Australia (ninth) on the world rankings.

But make no mistake, the Wallabies, who have chalked up just three victories from nine starts this year, want to win every game.

Who’s a chance of making their debut?

Watch all the action from the Wallabies’ Spring Tour with every match streaming ad-free, live and on demand on Stan Sport. Kicks off this Sunday with Scotland v Wallabies from 3.10am AEDT.