As Gillon McLachlan and Richard Goyder settled into seats 1A and 1B of their short journey from Melbourne to Adelaide for the AFLW grand final on Saturday, two meaningful events were about to take place.

The AFL chief executive, who has completed eight men’s and six women’s seasons in charge, was about to tell his chairman that he was ready to move on.

Secondly, in the city that he was departing, McLachlan was missing another big match.

His son, Sidney, was leading out the Malvern Tigers against rivals Maccabi Warriors in the under-11 division one basketball grand final. 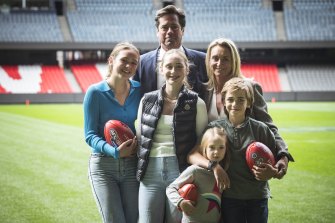 In the midst of an emotional media conference, in which McLachlan referenced his wife, Laura – who he described as a “peerless mother and partner” – and his four children several times, he said: “Everyone has their day, and this is mine.”

The basketball match wasn’t the reason he chose that weekend to tell Goyder, but the timing may just have tipped him over the edge.

McLachlan was already well into his career at the AFL when his eldest child, Edie, was born. His youngest two, Sidney and Luna, were born while he was in one of the toughest and most revered jobs in Australia.

“Right for the AFL, right for me, right for my family. It’s clearly more complicated than that, but actually in simple terms it’s not.”

Goyder said the conversation at the front of plane wasn’t a surprise and later admitted he even wondered whether he could change McLachlan’s mind as late as Tuesday morning.

Goyder knows that finding a replacement as competent as McLachlan will be a gruelling process and for that reason, the chairman has tried to put off the transition.

In his own words, the AFL was “not happy” with McLachlan’s decision but “completely supportive”.

In Tuesday’s media conference, McLachlan also made reference to the timing of his announcement and how it allowed him to plan for the future; specifically the next phase of his career.

It remains what that will look like for McLachlan. His predecessor, Andrew Demetriou, found himself on the board of Crown shortly after he left the AFL in 2014.

His political and commercial acumen means McLachlan won’t be short on job offers. Melbourne Storm owner and close friend Matthew Tripp is on the verge of launching News Corp’s new wagering arm with Lachlan Murdoch. McLachlan has long tried to lure Tripp to work with him at the AFL, perhaps this time the roles could be reversed.

His resignation comes as the league arrives at several pivotal points.

The AFL has already begun negotiations with television networks about a new broadcast rights deal that will take the current contract beyond 2024.

With free-to-air ratings declining, McLachlan and his team will be hoping that a global streaming service like Amazon, Netflix or Google will dip its toes into AFL broadcasting, as Amazon Prime in the US has just done with its exclusive purchase of Thursday night football in the NFL.

More money from the broadcast deal will naturally allow the AFL to offer its players another pay increase in the upcoming CBA. The new bargaining agreement will be complicated by the desire from the AFL Players’ Association to merge the men’s and the women’s game into the same deal.

The looming shadow that concussion is casting over the game will continue to make league executives uncomfortable for decades to come, but that’s hardly a problem that McLachlan could have solved in his tenure.

Concussion is and will continue to be a significant issue for all contact sports across the world as we learn about degenerative brain disease with increased research.

When all of McLachlan’s final tasks have been achieved, the game will be in a far more certain and stable position politically and financially than when he started.

Malvern won the basketball game. Sidney became a premiership player. His dad will be able to be there next year when the Tigers aim to go back-to-back.