The Dragons have rained all over Canterbury’s Back to Belmore parade – just – by holding off multiple Bulldogs comebacks to prevail 34-24 and install themselves on the edge of the top eight.

St George Illawarra had looked home by the half-hour mark when skipper Ben Hunt dummied his way through soft defence for a 16-2 lead and the Dragons’ third try in seven minutes.

But with 16,991 blue-and-white clad fans crammed into a sold-out Belmore Oval, the Bulldogs had the faithful in raptures when Jake Averillo returned serve with tries either side of half-time.

Canterbury’s suburban stomping ground went up as one when maligned half Kyle Flanagan dived over to claim an 18-16 lead.

Within minutes, though, the Dragons sat them back down for good when Zac Lomax scored from Josh Addo-Carr’s second ill-timed rush in from his wing to drag the advantage back.

When veteran hooker Andrew McCullough doubled down the Dragons led 28-18, only for the Dogs to keep coming. 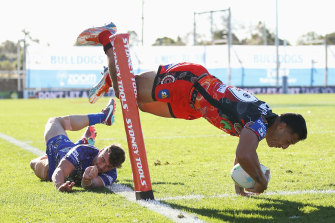 Tautau Moga dots down for the Dragons against Canterbury at Belmore.Credit:Getty

A delicate Matt Burton grubber from 30 metres out sat up perfectly for Addo-Carr to send centre Aaron Schoupp on his way before Burton’s conversion once more made it a four-point game.

It was not until Blake Lawrie barged onto a short ball for the first try of his 91-game career that the Dragons had enough breathing space to withstand one last Bulldogs flourish.

Considering Burton’s famed left boot had all the accuracy of a CityRail timetable in the first 40, his sideline conversions and short kicking game after the break proved critical in Canterbury’s revival.

With their star five-eighth repeatedly sending high kicks too deep at the railway end of the ground, the Bulldogs’ early glut of field position amounted to just a penalty goal before the Dragons struck. 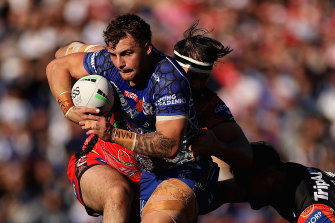 Aaron Schoupp was one of three tryscorers for the Bulldogs, who put on more points than they have all season despite ultimately going down by 10 points.Credit:Getty

Addo-Carr’s unnecessary flight in from his flank saw journeyman Tautau Moga diving over in the corner before a simple shift to the opposite edge had Mat Feagai doing the same for a 10-2 lead.

When Burton sprayed the resulting kick-off out on the full and Hunt scurried over, the Dragons had their third try in less than 10 minutes and Canterbury looked well and truly cooked.

If Averillo’s first try offered respite at most, his second just after half-time presented genuine hope – the Dragons’ defence caught short at close range on both occasions.

Flanagan’s four-pointer gave Canterbury a hard-fought but ultimately futile lead, both outfits then taking turns spoiling attacking raids either on their own or through dogged defence.

The Dragons now sit behind eighth-placed South Sydney on points differential only, with two wins on the trot going into a round 13 bye.

The Bulldogs remain rooted to the bottom of the NRL ladder, but at least gave fans their money’s worth with more points than they’ve scored all season and fight to match.