Nathan Cleary may have one hand on what should be the Australian No.7 jersey, but the whips are beginning to crack in Kangaroos camp when it comes to the big, and not-so-big men charged with laying a World Cup-winning platform.

For all the focus on the halfback race between Cleary and Daly Cherry-Evans, how coach Mal Meninga balances his forward pack is emerging as a curlier question for the defending champions.

Results going as they should, Australia is on course for a semi-final bout with New Zealand worth salivating over, with the Kiwis pack the most formidable going around.

New Zealand also have Brandon Smith as a rough-and-tough middle at hooker and on average, 3-4 kilograms per man on Australia’s forward options.

On the other side of the draw, Tonga’s first choice pack sees that size advantage swell towards an average of seven kilos as the likes of Addin Fonua-Blake (123 kg), Junior Tatola (114kg) and Haumole Olakau’atu (113kg) squash the scales in a rotation where hooker Siliva Havili – due back from injury next game – is the lightest customer at 106kg.

Unless Samoa swing into gear fast, either Tonga or England await in the World Cup final.

The English pack – with Victor Radley, John Bateman and Luke Thompson all more mobile than monster – offers more resemblance to the Kangaroos, depending how Meninga arrives at his first-choice 17.

A final pool game against Italy will see Cherry-Evans and Cleary share the playmaking duties, either as a pairing or getting one half each at halfback.

Meninga has hinted at continuing to tinker with his preferred side in a likely quarter-final clash with Lebanon, though the bulk of trial and error up front (not that there’s been any yet) will be sorted this time next week. 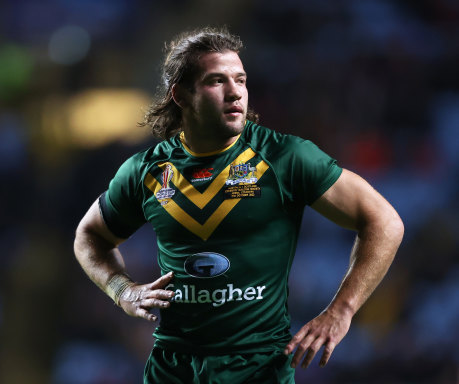 Pat Carrigan is one of a few middle options at Mal Meninga’s disposal.Credit:Getty

Isaah Yeo is a lock at lock and Cameron Murray looms as the right-edge back-rower, similar to how Brad Fittler balances the pair for NSW, while Harry Grant and Ben Hunt as dual dummy halves is working a treat.

Tino Fa’asuamaleaui shapes as one prop and with those New Zealand and Tonga big men in mind, Reagan Campbell-Gillard’s 115 kilos may well edge him into one front-row role, with Lindsay Collins and Patrick Carrigan (106 kg), Jake Trbojevic (107kg) and pocket rocket Reuben Cotter (95kg) the other options.

Each offers a point of difference, but two will likely miss out. Collins is your classic bash and barge, Trbojevic a ball-playing middle, Carrigan a blend of the two and Cotter a rare beast in himself.

With the ability to punch out 10 kilometres and 80 minutes in the middle – as he did this year when the Cowboys played Parramatta, in Darwin no less – Cotter’s leg speed and enthusiasm were used superbly around the ruck by Todd Payten all year and Billy Slater in Origin I.

A hamstring injury ruled Cotter out of the rest of Queensland’s campaign, but he, Carrigan and Collins especially turned the tide of that series opener against a bigger-bodied NSW pack.

As another option, Angus Crichton’s ability to switch from left back-row into the middle has served the Blues well in the past.

A traditional bench breakdown would see Liam Martin edge Jeremiah Nanai on experience and being just a tiny bit feral.

Meninga has options aplenty if not the size to match the Kiwi and Tongan packs that await in the coming weeks. But then again, he might not need to.