Fremantle coach Justin Longmuir has urged his players to send David Mundy out on a high by producing a barnstorming end to the AFL season.

Mundy announced his retirement during the week, meaning the Dockers have little time to get their act together and ensure the 37-year-old goes out with a flag. 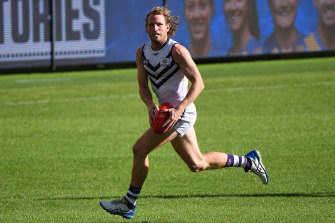 Fremantle are currently mired in a mini form slump, with their home losses to Melbourne (46 points) and Sydney (17 points) coming either side of the draw against Richmond.

The results have seen the Dockers slide to sixth, meaning they will likely need to beat the Western Bulldogs, West Coast and the Giants in the final three rounds to have any hope of snaring a top-four berth.

Longmuir wants his players to use Mundy’s impending retirement as extra motivation, starting with Saturday’s crunch clash with the Bulldogs at Marvel Stadium.

“It’s got to be front of mind for our players,” Longmuir said.

“He is close to the end, and we need to make sure we put all of our own personal issues and indifferences to one side and see if we can help him achieve what he wants to achieve in his last handful of games.

“We need to make sure we send him out the right way.”

But forward Matt Taberner is one player who is in grave danger of being dropped after he was held goalless from six disposals against the Demons.

“We need Tabs back to his best,” Longmuir said of Taberner, who has booted just three goals from his last four games.

“We haven’t got a lot of goalkickers on our list that can kick multiple goals and bags of goals. Tabs is one of those guys.

“I understand everyone’s frustration and the fact they’re seeing his form at the moment.

“We’ll decide later today whether he needs to work at his game at WAFL level or AFL.”

With a number of Dockers players down on confidence, Longmuir feels it’s important he doesn’t make too many changes.

“[Wielding the axe] is not really my style,” Longmuir said.

“I think players grow confidence out of getting backed in and not being on edge all the time, but we need to find the balance between rewarding performances at Peel as well.”

Midfielder Darcy Tucker, who tallied 38 disposals and three goals for Peel on the weekend, is a strong chance to earn a recall.

If Taberner is dropped, Sam Sturt could come in and fill the void following his four-goal effort in the WAFL.