Ten days out from the first Test against England, Rennie warned an erroneous send-off could ruin next year’s World Cup final after Jones and other leading coaches and former Test players blocked the 20-minute variation from going to a global trial.

It was the second time in 12 months World Rugby’s high-performance committee blocked the reform, used in The Rugby Championship and Super Rugby since last year, despite the governing body’s law review group voting to approve it.

“I was in a group that voted for a global trial for the 20-minute red card. It got voted through and then the rugby committee, which is a committee above that, disagreed. It’s disappointing,” Rennie said.

“There’s people who think there’s no consequences if it’s only a 20-minute red card, but the consequences for the individual is that [a suspension] starts at six weeks. They get sent off and then they don’t get to come back on. The team is hurt by that.”

With Eddie Jones arriving in Australia with his England squad on Wednesday, the issue is an ongoing bone of contention between the north and south. 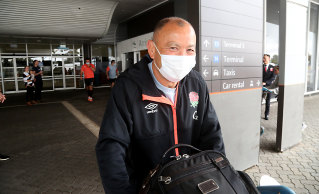 Next week’s first Test – the first time England has toured here in six years – will operate with the traditional 80-minute red card. Any hope of seeing the 20-minute replacement adopted globally has been snuffed out until at least 2025, but the southern hemisphere unions are still pushing for the reform, with the Rugby Championship to use it again this year.

The high performance committee is chaired by former France coach and powerbroker Bernard Laporte. A World Rugby source said Jones, Erasmus and Hansen were in favour of adopting it globally for trial.

World Rugby, fighting a class action from a group of former players who allege it and other governing bodies failed to protect them against the dangers of repeated concussions, this week announced a mandatory 12-day stand-down for elite players with concussion symptoms.

“I’d hate to see a World Cup final where there’s a red card given early, which is actually inaccurate, and affects the result.”

It comes on the back of a crackdown on dangerous tackles, with rugby laws prohibiting any contact with the head.

Rennie said safety was front and centre of everyone’s minds, but the pressure of live decision-making could lead to poor outcomes.

“A lot of it is not thuggery, you’d say reckless [acts] but certainly not malicious, a lot of it,” he said.

“Then there’s the inconsistency of it. There’s mitigating circumstances that can bring it down from a red to a yellow, but referees are forced to make decisions pretty quickly based on whatever angles there are and, invariably, post-game there are more angles that give a better picture.” 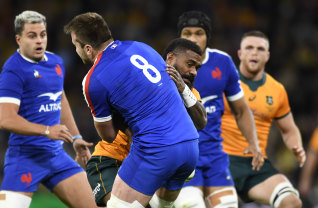 Marika Koroibete was sent off for this tackle against France.Credit:Getty

Rennie referred to Australia’s against-the-odds win over France last July, in which Wallabies winger Marika Koroibete was sent off in the opening minutes.

“We play 75 minutes with 14 [players] and, while we won, Marika got off within 30 minutes on the Monday [before the foul play review committee] because there was clear contact to the body first, before the head,” he said.

“The 20-minute red card allows for referee error and also means that a team has been punished for 20 minutes. It’s a long time without a player, but we get a game of 15 on 15.

“I’d hate to see a World Cup final where there’s a red card given early, which is actually inaccurate and affects the result.

“We all want consistency around it and my preference would be a 20-minute red card. Certainly, up north, they feel differently.”

Other law changes pioneered in Super Rugby, such as the 50:22 rule and goal-line dropouts, were approved for use around the world and at all elite levels this year, but the committee chose to delay the 20-minute replacement, noting the data from the Rugby Championship and Super Rugby were inconclusive.

Watch every match of the July Test Series on the Home of Rugby, Stan Sport. Kicks off Saturday 2 July with Wallabies v England, New Zealand v Ireland, South Africa v Wales and Argentina v Scotland. All streaming ad-free, live and on demand only on Stan Sport.