Melbourne have gained a sliver of revenge on the team which broke their hearts in last season’s grand final just four months ago, beginning their new AFLW season with an 18-point victory over Adelaide at Glenelg Oval on Friday night.

In a grand final re-match with plenty of appeal, the Demons had their noses in front for almost the entire match and booted 2.2 to 1.1 in the final quarter to secure the victory.

Last time around it was the Crows, with star player Erin Phillips in the squad, who enjoyed premiership success for the third time with a 13-point win over Melbourne.

This return clash was moved from Norwood Oval earlier this week due to conditions but Adelaide, with only four players different from their grand final line-up, appeared confident as the home team either way. 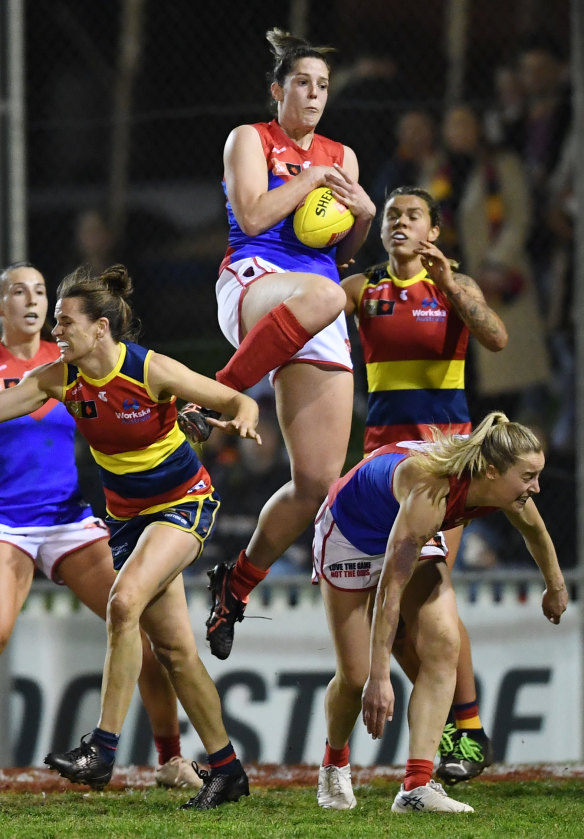 One of those player moves from the team was star Phillips, who jumped ship to skipper the brand new cross-town rivals Port Adelaide.

Leading goalkicker from last season, Ash Woodland, picked up where she left off, getting the Crows on the board early, retaliated by a rush through from Demon Kate Hore which was questioned by Crows fans after it appeared to be touched.

Adelaide found repeat entries throughout the first quarter, but the Demons found ten more contested possessions and led by four at the first break.

The pressure was intense in the second stanza, as Melbourne limited the Crows to shallow entries in their inside 50. Tayla Harris was strong in her match up against Chelsea Randall – a classic rivalry – and celebrated her 50th AFLW game with the Demons’ second goal.

The inaccurate Demons led by 10 points at the main break, although the Crows had almost doubled their tackle count.

In Adelaide’s last three wins over the Demons their strength has been in shutting down the opposition’s packed forward line. They managed to continue that pattern early in the third quarter. Just as importantly, Woodland slotted consecutive majors for the home team.

Demons skipper Daisy Pearce had her calf and shin strapped on the bench but returned to the field. Not long after she celebrated with a goal from Tyla Hanks.

The physicality of the game intensified, and a captain’s goal from Pearce edged the Demons ahead. 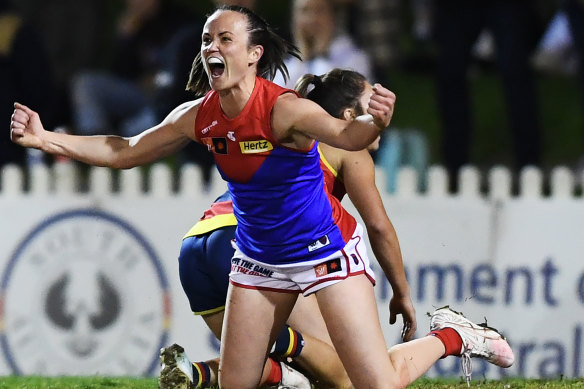 At the start of the fourth term, Crow Danielle Ponter booted an impressive goal to raise hopes. But it was responded to by Eden Zanker who extended the Demons’ lead and moved the match beyond Adelaide’s reach.

An elated Pearce said she was “really proud of our efforts” in proving themselves to Adelaide.

“We all understand our roles in defence a lot better and that helps put us in positions we can all play when we win the ball back,” said Pearce.

“In the grand final I thought our effort was really good, we were up for the fight but we probably fed their intercept game with the way we moved the ball, whereas tonight we challenged them a bit more, made them move.“